Flemenstar to be trained by Tony Martin for this season 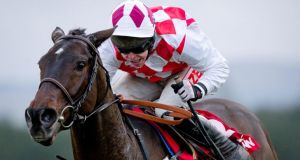 Flemenstar and jockey Andrew Lynch on the way to winning the John Durkan Memorial Punchestown Chase in 2012. Photograph: Morgan Treacy/Inpho

The eight-year-old won three Grade One events when in the care of Peter Casey, but Curran has decided to give his star performer a change of scenery.

:“He’s going to Tony Martin. Hopefully a move will freshen him up a bit and will be the right thing to do,” said Curran.

Flemenstar proved a revelation when sent chasing in the 2011/12 season, recording five wins over fences for Casey, including two Grade One events.

He started last term in the same sparkling form, winning the Fortria Chase on his reappearance before landing another success at the highest level in the John Durkan Chase.

However, he suffered defeats when favourite for both the Lexus Chase and Irish Hennessy at Leopardstown, before being well beaten by Sprinter Sacre in the Melling Chase at Aintree on what was to be his final start for Casey.

The horse was reported to be suffering from a virus during those post-Christmas efforts and while Curran has now moved the horse from Casey’s yard, he insists it was an amicable split.

He said: “There’s been no falling out, there was never any falling out at all.

“We just thought it was better to move the horse with the idea being it would freshen him up. We had some great times with Peter.”

Curran will send Flemenstar to Martin in the next few weeks but has no immediate plan in mind.

He said: “He won’t be going to Tony’s for two or three weeks and there’s nothing planned yet for him.”

Speaking earlier, Casey said: “He’s not coming back. It is disappointing news.”