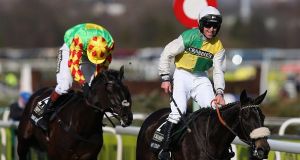 2015 Grand National winner Many Clouds has been entered again for this year’s race. Photograph: Getty

Last year’s winner Many Clouds features among 126 entries for the Crabbie’s Grand National on April 9th, with the Aintree feature attracting the highest number of entries since 2008.

Oliver Sherwood’s stable star chased home Hennessy Gold Cup winner Smad Place at Cheltenham at the weekend and will be attempting to emulate Red Rum, who was the last horse to win back-to-back Nationals in 1973-74.

Dr Richard Newland’s 2014 winner Pineau De Re, who became the first horse since 2002 hero Bindaree to win another contest after taking the famous race when scoring over hurdles recently, is also on the list.

Double Seven was sent off favourite for the National in 2014 and eventually finished third, but he subsequently missed the entire 2014-15 season.

Martin Brassil’s charge returned to action at Punchestown on New Year’s Eve and has since run again over hurdles at that track last month.

“Double Seven is grand,” said Brassil, who won the race in 2006 with Numbersixvalverde.

“He’s had the two runs over hurdles, but it is hard to know what to make of them because he is not a soft ground horse.

“We are taking it one step at a time at the moment and we won’t really know where we are until he runs in a race when the conditions are right for him. He wants nice ground.

“I’m not sure what we are going to do between now and Aintree. He could have a run over fences, but we will see how he is.”

Ted Walsh has two contenders in Seabass, who finished third in the race in 2012 for Katie Walsh, and the classy Foxrock, while Gordon Elliott’s entry is spearheaded by Ucello Conti and Causes of Causes.

Becher Chase winner Highland Lodge, the Paul and Clare Rooney-owned pair of The Last Samuri and Kruzhlinin and former Gold Cup hero Long Run are others to note.