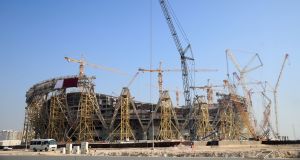 Qatar has expressed an interest in hosting an Olympic and Paralympic Games as early as 2032. Photograph: Adam Davy/PA Wire

Qatar, the host of the 2022 World Cup, announced on Monday it would also like to stage the Olympics, possibly in 2032.

The Gulf Arab state’s Olympic committee said it submitted a request to the International Olympic Committee (IOC) to join the phase of “continuous dialogue” about hosting a future Games.

Oil-rich Qatar is increasingly keen to host major sporting events, and has already welcomed world athletics championships, though scorching desert temperatures during parts of the year have caused some anxiety in the sports world.

“It is this proven track-record and wealth of experience, along with our desire to use sport to promote peace and cultural exchange, that will form the basis of our discussions with the Commission,” Qatar Olympic Committee president Sheikh Joaan bin Hamad bin Khalifa al-Thani said in a statement.

The Olympics have never been hosted in the Middle East, and Qatar will be the first nation in the region to host soccer’s biggest showpiece.

It has invested billions of dollars in preparing for the 2022 World Cup. However, human rights groups have criticised the treatment of migrant workers.

The Qatari government has said it does not tolerate unscrupulous treatment of workers.

Qatar’s Doha had also unsuccessfully bid for the 2016 and 2020 Olympics.

“The IOC . . . welcomes the interest recently expressed by Qatar, which is the latest country to enter the new dialogue phase,” the International Olympic Committee said in a statement.

The IOC has changed the bidding process in recent years to reduce costs and make it more attractive to interested cities, who now enter into an initial discussion with the IOC to see whether the Olympics would be a fit for them.

“These are ongoing, non-committal discussions that are not necessarily related to a specific edition of the Olympic Games or the Youth Olympic Games, and are an opportunity to explore a project without committing extensive time and resources,” the IOC said.

There is no deadline for a decision to be made, though usually cities are given at least seven years in advance to prepare for hosting the Games.

Several other countries have expressed an interest for the 2032 summer Olympics including Indonesia, Australia, India and Germany, among others.