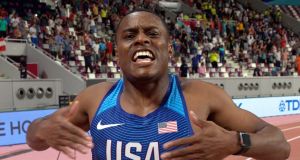 Christian Coleman: has been provisionally suspended for being unavailable for three anti-doping tests in 12 months. Photograph: Valdrin Xhemaj/EPA

Sebastian Coe, the president of World Athletics, has warned Christian Coleman not to expect any special deals or favours that would allow him to return in time for the Tokyo Olympics if he is banned for missing anti-doping tests.

Coleman, who stormed to the world 100m title last October and was favourite for the event in Tokyo, is facing two years out of the sport after being provisionally suspended for three whereabouts failures in 12 months – the last of which occurred when he went Christmas shopping instead of being at his house when the testers were due to visit.

However last week the 24-year-old American claimed that a two-year sentence would be “overkill” – before floating the possibility that “some sort of deal” might be agreed where he was suspended but could return for the Olympics.

Coe has made it clear, however, that this was not how the Athletics Integrity Unit, the sport’s independent watchdog on anti-doping matters, worked.

“I would be very surprised if there was any thought that a deal is going to be struck here or in any of these cases,” Coe said. “It’s just not the system. That is not what the AIU does.”

While not mentioning Coleman by name, Coe also admitted his surprise that anyone with two strikes for missing tests was not more careful.

“I don’t think it is that complicated, I really don’t,” added Coe. “The athletes are asked to give their whereabouts for one hour a day, and there is plenty of scope if that one hour suddenly becomes a problem. It’s not arcane maritime law. You don’t need a degree in logistics from Cambridge to figure that out. It’s what you are expected to do.

“If you’re hanging by a thread on one or even two of those, then my instinct would be to be sitting by my front door for that hour. You wouldn’t risk not being there. And if they fall foul of this regularly they will be banned.

“I can’t put it in any blunter way. And that is what the AIU is there to do. It’s not a sort of an afterthought. Alongside biological passports and adverse analytical findings it is a central part of the anti-doping landscape.”

Coe said he was heartened by so many athletes expressing their support for the whereabouts rule after Coleman and the world 400m champion Salwa Eid Naser were both provisionally suspended in the past month for missing drugs tests.

“It’s the world they live in,” he added. “They accept it. And they’re actually quite grateful that we’ve got systems in place protecting them.”

Meanwhile Coe is cautiously optimistic that some top-level athletics will be able to return in front of crowds this summer, starting with the Diamond League meeting in Monaco.

“The advantage athletics has is it’s not a contact sport,” said Coe. “Our first Diamond League we hope will be here in Monaco on 14 August and hopefully there will be a crowd in the stadium.

“To get the sport up and running globally is a challenge and may not happen for some months but in Monaco I have 20 people back in the office.”

1 Tipping Point: DeChambeau’s transformation raises questions, but who will ask them?
2 Patrick Mahomes reported to have signed 10-year $400m deal with Chiefs
3 Tottenham take the gift of Keane’s own goal and grind out the rest
4 Ken Early: Resurgent United can be the top team – in Manchester
5 Coronavirus implications will delay completion of CVC’s €450m Six Nations deal
Real news has value SUBSCRIBE