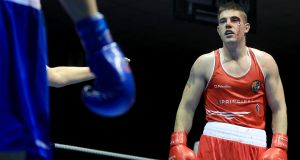 Three-time European light-heavyweight champion Joe Ward has admitted that a vacant space on his mantelpiece helped convince him to remain in the amateur ranks up until the Tokyo 2020 Olympics in a boost for Irish boxing.

Ward, who has turned down offers from pro promoters in the USA and the UK, will lead Ireland into the qualifiers for the 32nd Olympiad.

And in another boost for Team Ireland, Tipperary super-heavy Dean Gardiner could be going to Hamburg after England’s Frazer Clarke suffered a hamstring injury.

Gardiner finished in the ninth spot and Clarke second at last month’s Europeans in the Ukraine where a top eight finish was required to qualify for Hamburg, but with Clarke out Gardiner may be bumped up one place.

Ward won gold in the Ukraine, his third European title since 2011. He’ll be targeting a third successive World medal in Hamburg having won bronze in 2013 and silver in 2015.

The 23-year-old wants the opportunity put the record straight from a disappointing Rio 2016 by his high standards.

He said: “Myself and Bernard [Bernard Dunne, IABA High-Performance Director] sat down and we came to an agreement that I’ll stay until Tokyo [2020].

“Obviously, the best decision for me to make is to stay around until Tokyo. We put a plan in place. I’ve informed them (pro promoters) of my decision.

“I felt that I would have left something behind. This could be the opportunity to put one of those [Olympic] medals on the mantelpiece. There’s a space on my mantelpiece for one of those medals.

“It’s something I wanted to do to put my mind at rest. I’m going to Hamburg now with a top class team and my mind is at rest and I’m fully focussed.”

Irish boxing, in both sexes, will be in action next month with an eight-strong women’s squad which includes World Elite silver medallist Kellie Harrington fighting at the EU Championships in Cascia, Italy.