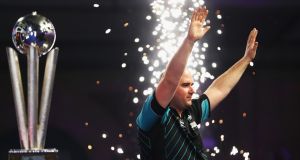 As a legend of the oche bowed out a new star was born. Rob Cross annihilated Phil Taylor in his first World Championship final, in his first appearance at the tournament, to take the PDC title by seven sets to two at Alexandra Palace.

The room belonged to the retiring 16-times champion, with a capacity crowd singing his name in a loop during his final match in the competition he has dominated for nearly three decades. But the title belongs to the Kent-born former electrician, a 27-year-old who turned professional only last year. He gave a performance that combined power and utter calm, hitting 11 180s, averaging 107.67 with three darts and converting 60% of his out-shots.

“You’ve got a little monster on your hands,” Taylor said of the new champion afterwards. “I believe Rob Cross and Mike van Gerwen can go on to dominate the sport for the next five years. It was a mismatch really. That’s it for me because I don’t have the energy to beat him. It’s weird to say that but I got to the final and, if you’d have told me that last week, I would have taken it.”

Cross, who was born in the year Taylor won his first world title, took care to compliment his opponent, lending him the trophy and singing his praises after the match. “This game has changed my life. I’ve won my first world title. But tonight is all about Phil Taylor. You won’t see another sportsman like him. I’d like to say thank you to him but at the same time I played well tonight.”

With play beginning at 8pm it was a largely sober Ally Pally that awaited the final. The noise arrived only when the two competitors appeared from behind the stage. Cross walked to the oche to the tune of Feeling Hot, Hot, Hot while Taylor waited for his walk-on sitting underneath the looming jib camera that swings over the hall. Then the chanting began, Walking in a Taylor wonderland filling the room like a chorus of You’ll Never Walk Alone on a grand night at Anfield.

Taylor took his time wending his way to the stage, taking selfies, signing autographs. When he reached the oche, he did a little jig.

As the players stepped up to the oche, Cross was on the balls of his feet, while Taylor shuffled up to collect his arrows. Cross was unerring in his finishing while Taylor missed two doubles in the fourth leg to let Cross claim the first set with a 47 checkout. The second set went similarly, Cross claiming a 3-1 victory with his highest checkout of the tournament, 167. Taylor puffed out his cheeks as if in recognition of the challenge he was facing.

The third set was a straight 3-0 win for Cross, a 153 checkout in the third leg another unerring moment of ruthlessness. But just as talk of a whitewash began to bubble up, the Power started to surge in the fourth set. Needing 151 to hold in the first leg, Taylor hit his highest checkout of the tournament. Cross then failed to complete 127. Taylor hit double 16 for his out-shot and held the next leg for 3-1.

In his 27 years at the top Taylor has never hit a nine-dart checkout in the World Championship. With confidence suddenly flowing through his veins he began the first leg of the fifth set with consecutive 180s. With 141 left on the board Taylor hit treble 20, then treble 19. One final dart stood between him and yet another moment of history but Taylor clipped the wire on double 12 and his arrow slid to the wrong side of the line.

Taylor smiled and joked with Cross over the water jugs but it was a crucial moment and he knew it. His darts did not reach the same level again in the set as Cross cruised to a 4-1 lead. He won the sixth set 3-1 and the seventh comprehensively too, but with the finishing line approaching Cross finally showed some nerves. He missed a double six in the first leg of the eighth and a double four in the third to let Taylor in to claim the set and cut the deficit to 6-2. The 57-year-old milked it for all it was worth and slipped a spot of sledging into the ear of his opponent for good measure.

Ultimately it was to no avail. Whatever yips might have entered Cross’s system were worked straight out in the ninth set. He held the first leg in 13 darts and went out on a double 20. The second was a cruise as Taylor failed to reach 100 three times. The third was just as unerring as any before it and Cross won the title on his favourite double of 16. He celebrated simply by tapping his hands on his bald head, as if to check everything was still there. In the crowd they started up a new number; ‘Robbie Cross’ to the tune of KC and the Sunshine Band’s Give It Up. Taylor had already decided to do exactly that.

1 Connell losing touch with club championship is real tragedy of Normal People
2 Ger Loughnane and the spark that lit Clare’s hurling revolution
3 The strangest fishing club in the US and the huge pike that bit a schoolboy
4 TV View: Sky’s talk of piped-in atmosphere is ominous
5 Shane Ryan: Shark attacks and gruelling shifts on a Covid-free Atlantic mission
Real news has value SUBSCRIBE