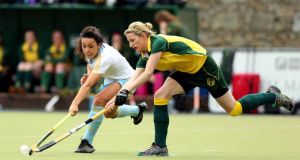 At the end of a week that saw them retain their intervarsity title, beating the University of Ulster in the Chilean Cup final, UCD are facing a busy weekend.

They play Corinthian in the first round of the Electric Ireland Irish Senior Cup tomorrow before taking on Old Alexandra in the league on Sunday.

Corinthian, Trinity and North Kildare also have double-headers this weekend. Trinity travel to Armagh tomorrow for their cup game, returning home to play Corinthian in the league on Sunday.

Few sides, though, face a tougher programme than North Kildare: they meet cup holders Railway Union tomorrow, and then square up on Sunday to Hermes in the league.

Greenfields, Hermes, Loreto, Lurgan, Alexandra, Pembroke Wanderers, Ulster Elks and Lisnagarvey all received byes in to the second round.