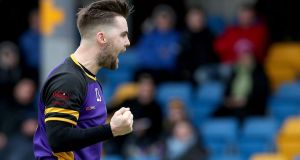 Alan Sothern’s two-goal haul saw Pembroke usher in their new Serpentine Avenue turf in style with an excellent 3-1 win over Banbridge, inflicting a fifth successive defeat on the Co Down club.

The Olympian’s double made it nine goals for the campaign as the Ballsbridge club came from a goal down, continuing their upbeat start to the season. In a Pembroke side featuring nine Munster men, it was perhaps fitting that one of the star products of the youth system shone on a marquee day for the club as they cut the ribbon on a top class new surface.

Philip Brown’s corner goal had given Bann an early advantage, but Sothern got an equaliser from play before half-time and he put Pembroke in front five minutes after half-time. Jack Ryan closed out the win with four minutes to go.

Last term Pembroke earned just one point against sides in the top half of the table, yet this year they have already out-stripped that mark, suggesting they can be a contender.

Irish Senior Cup winners last season Bann, meanwhile, look a long way off their best as the departures of Matthew Bell and Kyle Marshall to foreign shores has been keenly felt as they slump to sixth place.

National champions Three Rock Rovers arrested their mini-slump with a comfortable 3-1 success over Monkstown, with Luke Madeley returning from injury to score an early corner goal. Harry Morris and Ross Canning made it 3-0 before Nick Dee got a consolation for Town in the closing minutes.

Lisnagarvey’s 10-0 pummelling of Cork C of I means they remain the only side with a perfect record. Glenanne, having played a game extra, lead the way courtesy of a largely forgettable 1-0 win over Annadale courtesy of Rowland Rixon-Fuller’s final-quarter goal.