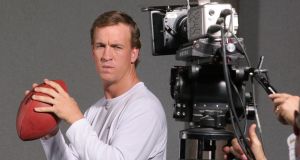 Peyton Manning officially announced his retirement on Monday at a press conference at the Denver Broncos practice facility in Englewood, Colorado. The announcement confirmed the Broncos’ statement on Sunday that Manning would end his 18-year career in the NFL.

It also means Manning will finish his career with a Super Bowl victory in his final game. He leaves the game with two Super Bowl titles, four Super Bowl appearances and the NFL record for passing yards.

“There’s something about 18 years,” said an emotional Manning. “It’s a good number. Today I retire.”

Though most in the NFL felt this would be Manning’s last season, especially after plantar fasciitis in his foot forced him to miss six games at the end of the regular season, he appeared unsure of that decision in recent days. He delayed announcing his retirement even as the Broncos gave clear signals they planned to release him this week rather than guarantee his $19m salary for another season.

“If there is a list of achievements needed to attain greatness, you have checked every box … you have been a joy,” said Joe Ellis, the Broncos president.

The Denver general manager, John Elway, who also led the team to Super Bowl success as quarterback paid his own tribute. “It was a treat as an ex-quarterback to see Peyton Manning prepare and play … he did revolutionize the game. Peyton Manning utilized every asset God gave him.”

Gary Kubiak coached Manning for just nine months but it was enough for the pair to win Super Bowl 50 together. “We all respected you as a person,” said Kubiak. “Everything ended the right way for the Broncos and what a ride it was.”

The other great quarterback of Manning’s generation, Tom Brady, paid tribute to his old rival on Facebook on Sunday. “Congratulations Peyton, on an incredible career,” he wrote. “You changed the game forever and made everyone around you better. It’s been an honor.”

He leaves the game as one of its most popular and accomplished players with 71,940 passing yards and 251 touchdowns with the Broncos and Indianapolis Colts. His last several months have been marked by controversy, however. An Al Jazeera reported accused him of using HGH and more details have emerged in the past few weeks about an allegation that he exposed himself to a female trainer while a student at the University of Tennessee.