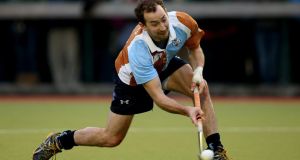 Three Rock Rovers added the Leinster Senior Cup, their first since 1997, to the Irish trophy they won a few weeks ago.

The home side never fell behind at Grange Road against the students – who were hoping to win their first senior Leinster title – nor were Rovers ever deeply troubled. They led the match from the first Peter Blakeney goal after 14 minutes until the final hooter.

By far the more experienced of the sides, Rovers made the most of their opportunities and UCD seemed to always be chasing the match.

Doubtlessly talented, the students’ inexperience played into the winners’ hands and with Mitch Darling, Blakeney and the busy Jody Hosking constantly threatening, Rovers had done enough to feel comfortably in control going into the last quarter of the match.

Blakeney, particularly, brought Rovers threat up a notch. His first goal was a disguised high flick that he put in glued to the carpet. Nine minutes later, in a break out of their circle triggered by captain Darling, Rovers swept up the pitch and after a five-pass interchange, it was the international Blakeney again touching in for 2-0.

UCD, however, responded within seconds with forward Nick Burns tapping in from three yards for 2-1.

Burns was the students’ driving force and alongside Rory O’Donoghue always looked to pressurise the winners. But with Joe Brennan vocal and secure in his pivot role at the back, Rovers had that bit more control.


Sweeping move
It was still 2-1 at halftime and while UCD began the second half brightly, pushing Rovers into their own half, it was the home side’s striker Johnny Bruton who picked off the first score of the half after another sweeping move.

This time it was Michael Maguire squaring the ball for Bruton to take the easiest of touches from a few feet out, with goalkeeper Conor Quinn fully committed to Maguire’s drive in.

Brennan then added a penalty, after Blakeney was upended knifing into the circle, for 4-1 on 51 minutes.

UCD did have chances, with O’Donoghue blazing one across the goal late in the second half. But the students didn’t get enough penalty corners to allow their captain O’Donoghue the chance to wind up his set piece routine.

In desperation UCD took off their goalkeeper Quinn for the closing minutes to try to shake up the scoreboard with an extra outfield player. To an extent it worked well – Nick Burns pounced on a broken ball in front of goal and whacked it past the excellent Stephen West in goal.

But it was too little too late for the students, and the stronger team lifted the Mills Cup for the first time in over 15 years.