Sent in as a nightwatchman, the Somerset tailender fell just short of a century 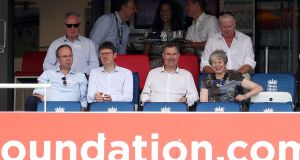 There was a bevy of merry ex-ministers at Lord’s, demob-happy evictees from the Tory cabinet – Greg Clark, David Gauke, Gavin Barwell, and Theresa May, sipping on something long, cold and fizzy. It seems it has become something of a Tory tradition, after John Major spent the very first day after he lost the prime ministership watching Surrey thrash the British Universities at the Oval.

The day’s play May watched was a little more entertaining than the one Major got and she even seemed to enjoy the long stretches of it she spent listening to Colin Graves, chairman of the England and Wales Cricket Board. Presumably he, and everyone else in the executive box, managed to stop themselves from cracking jokes about Ireland’s backstop.

Out in the middle, England were wrestling with some intractable problems of their own, namely their flimsy top and frail middle order. They stumbled on a solution for one of them by using Jack Leach as a nightwatchman.

They have been looking for an opener ever since Andrew Strauss retired. They have promoted Joe Root, and shoehorned in Moeen Ali, brought back Jonathan Trott for a crack, picked Nick Compton, plumped for Adam Lyth, gave Michael Carberry a go, had a hunch about Ben Duckett, dallied with Sam Robson, found Haseed Hameed then lost him again, had a punt on Alex Hales, tried Keaton Jennings, and have settled in the end for Rory Burns and Jason Roy.

It seems they were looking in the wrong places, since they had one skulking down the order at No 11. Although Jack Leach was not what you would call an obvious pick. He is averaging 4.66 in the Championship for Somerset this year, with a top score of nine. He is a better bat than that makes him sound – or he was, until he got hit on the head by Morne Morkel when he was playing against Surrey last summer. It took him a week to recover from the concussion, but longer to get over the knock to his confidence. He had only just made the highest first-class score of his life just a couple of weeks earlier, 66 against Lancashire, but has not made it past 18 in 35 innings since.

He has plenty of heart, though, so when England needed someone to cover for Roy, their swaggering alpha batsman, late on Wednesday evening, in he went. And, streaky as his play was on Thursday morning, he did not look desperately out of place in England’s top three, which, admittedly, probably says more about their form than his.

Rory Burns looked short of confidence, and got out, for the second time in this match, reaching for a wide delivery he had no need to go anywhere near. Still, the opening stand of 26 he put on with Leach, was, incredibly, the fifth-best England have managed since Alastair Cook retired last September.

Leach had done a lot of playing and missing in those early overs, when he was beaten over and again playing outside off. But everything changed when Mark Adair bowled him something full and inviting, which Leach clipped back down the ground for four. Next over Boyd Rankin made a similar mistake, and again Leach knocked the ball back the way it came for four. Then he drove tidily through the covers for another and, two balls later, clipped a third off his hips. And Lord’s, all of a sudden, cannot have seemed so very different to Convent Field, where he has spent many happy hours batting at No 4 for Taunton Deane in the West of England Premier League.

Leach even took a single off the sixth ball of that over, just to spare Roy from having to face Tim Murtagh and his menacing 75mph outswing. He met Roy mid-pitch to bump fists, and, presumably, to reassure him that “I’ll handle this”. He took his helmet off and stood there, his bald head glowing red as he mopped his brow.

It was hot out there now, the air almost too thick to breathe. In high summer, Leach had found his mid-season form and came skipping down the pitch and a clip for four through midwicket.

Leach’s 50 came with a thick edge past the slips, and then he pressed on, beyond that career-best score of 66. After lunch, Ireland finally realised they ought to try bouncing him out, and set Rankin loose with a leg slip and a short leg. Well, it was a thankless business on this pitch. Leach got in square behind the straight ones, but had a little trouble with the others.

He flapped a catch past leg slip, was dropped once too, on 72, and you felt then that it was the break he needed, that he might become the first Englishman to score a Test century as a nightwatchman. No such luck. He fell for 92, from 162 balls, the longest, and best, innings he has ever played.

Harder still, Leach will likely get dropped from the team next week. Which is a rough way to treat someone who spent all that time doing his bloody-minded best to clean up his team’s mess. Somewhere up in her box, May may just have been an ex-prime minister who had a pretty good idea how he felt. – Guardian