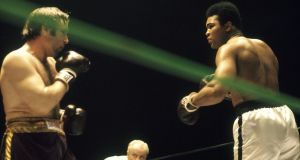 George Chuvalo taking on Muhammad Ali in Vancouver in a 1972 rematch. The Canadian pushed Ali the distance for a second time. Photo: Keystone-France/Gamma-Keystone via Getty Images

In the build-up to their first fight at Toronto’s Maple Leaf Gardens in March, 1966, Muhammad Ali dubbed George Chuvalo “the washerwoman”. An excessively cruel jibe about a game Canadian heavyweight who’d signed up for the bout at just 17 days’ notice, his opponent made a mockery of the insult when he became the first man to take Ali 15 rounds. Even if the champion always looked in control of the contest, he later described Chuvalo as the toughest fighter he’d faced to that point in his career.

“When it was all over, Ali was the guy who went to the hospital because he was pissing blood,” said Chuvalo. “Me? I went dancing with my wife. No question I got the best of that deal.”

In 93 professional bouts, he finished with a 73-18-2 record but was never knocked to the canvas. Some boast when his resume included clashes with Ali (twice), Joe Frazier (who shattered the orbital bone under one of his eyes), George Foreman, Floyd Patterson, Jimmy Ellis and Ernie Terrell, boldface names that defined arguably the greatest era in the division and the sport. In a different generation, Chuvalo might have snagged a brief hold of the belt. In that historic company, he was destined just to be a willing contender. Lacking in skills, overloaded with courage, the one undisputed title he earned was “the toughest man in Canada”.

That worthy description may have been down to his genes and a hardscrabble upbringing in Toronto. Having arrived from Croatia in search of a better life, his mother plucked chickens in a factory while his father, well, he was made of different stuff. Despite having only one good arm, he made his living skinning cattle in a slaughterhouse. During his mandated annual two weeks off, he famously turned up to work every day to sit and eyeball the two men who had to be hired to fill in for him. As you might expect, the domestic regime in the Chuvalo house was harsh and unforgiving.

Like so many of his peers, Chuvalo boxed way too long, retiring at 42, and, even then, his hardest fights came outside the ring. He struggled to find a role for himself, dabbling unsuccessfully in bit-part acting, including a cameo in “The Fly”. Then he encountered horror of of a more tangible kind.

A father of five, two of his sons died of heroin overdoses, a third shot himself in a hotel room while struggling to overcome addiction to the same drug. In the midst of so much sorrow, his first wife Lynne swallowed a bottle of pills and took her own life. He channelled his own grief into becoming an anti-drugs crusader, embarking on speaking tours that criss-crossed the country, doing such sterling work over the past quarter of a century that he was eventually awarded the keys to his hometown.

His second wife Joanne (a former co-worker of Lynne’s) was alongside him on that journey and he credited her with giving him the will to live in the darkest days, openly admitting he regularly considered suicide throughout the 1990s. When the couple first got together, Chuvalo’s mortgage had just been foreclosed upon by the Croatian Credit Union, the lender emptying the contents of his house onto the front lawn, and he was in parlous financial shape. His bank balance improved over the decades, his celebrity rekindling as fresh generations of Canadians came to appreciate the epic nature of his fistic career.

At his 80th birthday earlier this year, the eclectic guest list was a testament to a unique sporting life. Alongside former Olympic champion Donovan Bailey and Don Cherry, the face of ice hockey on Canadian television, there was Chuvalo’s close friend Marvin “The Weasel” Elkind, one-time driver to Jimmy Hoffa and notorious mob informant. The festive nature of that massive bash disguised the turmoil that currently surrounds Chuvalo. In the early stages of dementia, he’s embroiled in a tawdry, Learesque tug of war between his wife and the surviving children of his first marriage.

The saga began in 2013 when Joanne Chuvalo asked him to leave the home they shared following an argument. While she disputes whether this was intended to be a formal separation, his kids filed a divorce application on his behalf in 2015 and, not long after that, he had his license revoked when he was discovered lost and disoriented at the wheel of his car. No trial date has yet been set for the divorce but the details of the battle for guardianship of one of the country’s favourite sportsmen were laid bare in forensic detail in the Toronto Star last month.

Joanne Chuvalo has been accused in court documents of being an inveterate gambler with a prescription drug problem who is frittering away her husband’s money. She counters that he still loves her, wants to return home, and is being kept hidden and out of reach by his children who rotate him in and out of nursing facilities and safe houses all around Toronto so she can’t be alone with him. And, she alleges, all this only started when he drafted his latest will.

“I am always in mourning,” said Chuvalo one time, when asked about the tragedy that has besmirched his life. “I am not made of stone.”

Something the warring factions of his family seem to have forgot.