America at Large: Nike must wake up to human rights 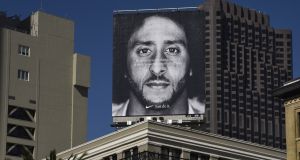 Nike turned Colin Kaepernick’s discrimination by the NFL into a slick advertising campaign.

The Qingdao Taekwang Shoes Co. turns out eight million pairs of Nikes per year. Its factory in the Chinese city of Laixi resembles any other sprawling production facility, apart from the six-foot high barbed wire fences that run along the perimeter walls, watchtowers standing sentry at various corners, and an in-house police station, replete with facial recognition technology, that also serves as a surveillance hub. The prison-style security is necessary to ensure that upon shift’s end, the Uyghurs working there return quickly to their segregated dormitories to prepare for mandatory patriotic re-education classes run by the Beijing government.

If there are Nike Shox or Airmax in your house, they were most likely put together in this sinister place where several hundred employees are, essentially, prisoners. Over the past couple of years, Uyghurs were transported to this plant as part of a “forced labour” initiative, often as punishment for “crimes” such as growing a beard or participating in an Islamic fast. They must eat in a separate cafeteria to their Han Chinese counterparts, are permitted only to walk around the outskirts of the factory to purchase necessities at the market stalls perched there, and, crucially, are not allowed to return to their homeland of Xinjiang, 3,400 km away in the north-west of the country.

When the Australian Strategic Policy Institute and the Washington Post first reported on this last March, Nike moved quickly to distance itself from the practice, claiming no new Uyghurs had been employed at Qingdao Taekwang since the end of 2019 and maintaining that any existing “workers” from Xinjiang were being phased out.

No solid proof of that assertion has yet been produced and, eight months later, it has emerged that Nike are among a group of American corporations, including Apple and Coca-Cola, lobbying to weaken the restrictions of the Uyghur Forced Labour Prevention Act, soon to be voted on by the US senate.

For their part, Nike contends they were just having “constructive discussions’ with the politicians involved. This begs the question as to why a company that says it has already ensured there are no more Uyghurs working at their supplier would need to talk to senators considering amendments to the bill.

After all, in its current form, the Act will require American companies to scrutinise supply chains so none of their products were produced by men and women in “forced labour” situations. If the legislation does exactly what Nike claim to have done at Qingdao Taekwang, why then would they, and so many of the other outfits who have profited from the Uyghurs, be lobbying to get the bill watered down? Well, apart from the obvious reason.

Then again, Nike has a few other thorny questions to answer about how it made money, and lots of it, from the Chinese government’s persecution of a minority group in the first place? Especially when this is the same company that turned Colin Kaepernick’s discrimination by the NFL into a slick advertising campaign, the conscientious swoosh that just last summer unequivocally supported Black Lives Matter, committing $40 million to social justice campaigns and the pursuit of racial equality.

“We must educate ourselves more deeply on the issues faced by Black communities,” said Nike CEO John Donahue, “and understand the enormous suffering and senseless tragedy racial bigotry creates”.

The type of noble sentiments that come to mind when the rest of the world intermittently pays attention to what president Xi Jinping’s government have done to the Uyghurs over the past three years.

In the apparent name of countering terrorism in Xinjiang, a region formerly known as East Turkestan that was only annexed by China in 1949, it has conducted what experts label “a cultural genocide”. Their attempts to secularise and Sinicize the predominantly Muslim population has seen one million of them placed in concentration camps or “vocational skills training centres” as Beijing describes them in its wonderfully Orwellian way.

There, Uyghur women have undergone compulsory sterilisations, abortion and birth control, and men have been killed so their organs could be harvested for transplants. Tens of thousands of families have been split up, mothers and fathers getting repatriated under armed guard to other parts of the country and coerced to work in factories supplying companies like Adidas, The Gap, Lacoste, Puma and Ralph Lauren.

Many of those toiling on the clothes and shoes assembly lines are Uyghurs with education, some are scientists, and most have skills they are no longer allowed to use. Several report getting electric shock punishments if they take too long on toilet breaks in their new “jobs”.

Numbering 83 at last count, the list of blue chip multi-nationals who have benefited from China effectively declaring war on the Uyghurs, their culture and religion (dozens of mosques have been destroyed and Muslim women prohibited from wearing veils), shows that Nike is not alone in this kind of despicable carry-on. But, they may well be the biggest hypocrites of all because they have been long since styling themselves the most punctilious of all sports brands.

“Believe in something,” went their cash-in on the Kaepernick situation. “Even if it means sacrificing everything.”

“Believe in money,” went a satirical version of the ad created by Badiucao, an exiled Chinese dissident who recently won the Vaclav Havel International Prize for Creative Dissent. “Even if it means sacrificing every Uyghur.”

Nike. Woke in America. Feigning sleep when it comes to human rights elsewhere.