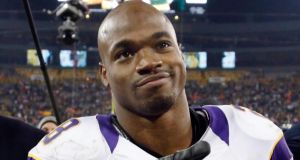 Minnesota Vikings running back Adrian Peterson was suspended without pay for at least the remainder of the 2014 season by the NFL for committing an “incident of abusive discipline” on his four-year-old son. Photograph: Tom Lynn/Reuters

Suspended Minnesota Vikings running back Adrian Peterson vowed never to use a switch again as a means of discipline and said he was startled to see the injuries it caused to his son.

In an interview published by USA Today, the 29-year-old said he loves his four-year-old son “more than anyone could ever imagine”.

The National Football League (NFL) suspended Peterson for at least the remainder of the season after he entered a no-contest plea in a Texas court to reckless assault of the child.

He will not be considered for reinstatement before April 15th.

“I won’t ever use a switch again,” Peterson said. “There’s different situations where a child needs to be disciplined as far as timeout, taking their toys away, making them take a nap. There’s so many different ways to discipline your kids.”

Peterson had been charged with a felony before his plea. The switch caused cuts and bruises over much of the child’s body.

“No one knows how I felt when I turned my child around after spanking him and seeing what I had left on his leg,” Peterson said. “No one knows that Dad sat there and apologised to him, hugged him and told him that I didn’t mean to do this to you and how sorry I was.”

NFL Commissioner Roger Goodell, in a letter announcing the suspension, said Peterson had showed “no meaningful remorse” for the incident.

“I love my son. I love my kids, my family,” Peterson told USA Today. “Like I said after I took the misdemeanour plea, I take full responsibility for my actions. I regret the situation.”

The NFL has been criticised for what is widely seen as being soft on domestic abuse since the case of Ray Rice, a Baltimore Ravens running back who knocked out his fiancée in February, escalated in May.

Goodell suspended Rice for two games but when the video emerged of the incident, the Ravens cut him and the NFL suspended him indefinitely.

Peterson said his situation is different.

“I take full responsibility because I spanked my child and no matter what my intentions were, I end up leaving those marks on his legs,” Peterson said. “That’s the bottom line.

“That’s not what I tried to do but that’s what ended up happening. Don’t put me in the same (category as Rice).”