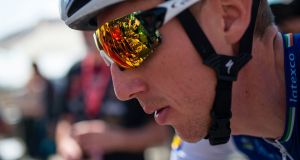 Dan Martin: “What I can take out of this race is the fact that I’ve always been there and proved my consistency.” Photograph: Josep Lago/AFP/Getty Images

Dan Martin put in an aggressive performance on the final stage of the Volta a Catalunya on Sunday. He attacked hard with three kilometres remaining, going clear with race leader Alejandro Valverde, and battling for the stage win.

Movistar rider Valverde was the only rider able to go with Martin and worked together with him to fend off the chase behind. Those in pursuit managed to bridge with 100 metres to go, swamping Martin, but Valverde had enough left in the tank to hold on.

Martin rolled across the line in Barcelona in fifth place and said afterwards that he had been determined to try to make his mark.

“Despite being a young team, the guys were always up there,” he said. “This makes me very proud. I knew it was going to be difficult to beat the fast riders today, but nevertheless I wanted to try something because I thought it was the best moment to do so. I didn’t get the win, but I’m happy with this move.”

Martin had previously been second to Valverde on stage three and, two days later, placed sixth into Lo Port.

Martin said that he was exiting the event with a boost in confidence. He has high aspirations for the Ardennes Classics, including a second career win in Liège-Bastogne-Liège, and believes his showing in Catalunya proves he is on track.

“Besides the solid results, what I can also take out of this race is the fact that I’ve always been there and proved my consistency. After testing myself on this circuit very similar to the Classics, I now look with even more confidence to the Ardennes,” he said.

He won both the Volta a Catalunya and Liège-Bastogne-Liège in 2013. He placed ninth overall in the Tour de France in 2016. The latter event will be his biggest goal this season, and his racing beforehand will be an important part of his build-up.