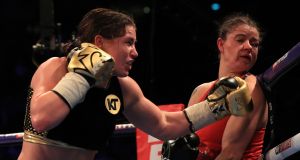 Katie Taylor made it four wins from four professional outings when she stylishly won a unanimous decision over Bulgarian Milena Koleva in her super featherweight contest in the Manchester Arena on Saturday.

Fighting on the undercard of the WBA lightweight championship fight between Anthony Crolla and Jorge Linares, Taylor was once again in complete control, imperiously dominating her first ever eight-round bout.

Her only disappointment might have been that she did not finish it within the distance, having put Koleva on the canvas in the seventh round.

Each of the eight, two-minute rounds went in the Bray Olympic champion’s favour, winning 10-9 in all except the seventh round, which she won 10-8 for an 80-72 win.

Taylor shaped the bout from round one and made the competent Koleva look like a novice despite the fact that the 28-year-old had already had a shot at the World IBF Super featherweight title.

Taylor’s jabs controlled the fight but the 30-year-old always seemed in a rush to finish it. Landing scoring blows in every round, it was another step towards her anticipated world title fight this summer.

Taylor prowled the ring in every round, Koleva backing off most of the time.

But Taylor was landing at will and although a brave and durable Koleva was taking the punishment, a huge left 10 seconds into the seventh round visibly rocked her. When that was followed by an innocuous right she went down.

While the Bulgarian got to her feet and resumed the bout, Taylor had it all but won.

It gives Taylor four wins in four months as a professional with a fifth bout scheduled for next month in London’s Wembley Stadium, where she will be on the undercard of the world heavyweight championship fight between Wladimir Klitschko and Anthony Joshua, a London 2012 Olympic gold medalist like Taylor.

A crowd of 90,000 is expected with Taylor’s opponent expected to be named in the coming weeks.