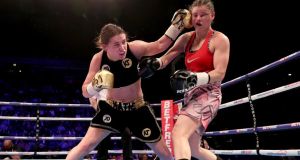 Once more the bling of her golden gloves and trim braid on black trunks gave way to a Katie Taylor in a tunnel-eyed, menacing mood at the Manchester Arena on Saturday night for her fourth professional win.

Her progress through the foothills of the professional ranks has been seamless and like a continuation of the best of her amateur career, once again there were virtually no flaws throughout the 16 minutes of boxing in her lightweight (135lbs) contest.

Milena Koleva’s challenge over eight rounds, Taylor’s first outing at that distance, added to the Olympic Champion’s growing body of work: four fights and four wins that have felt processional.

Taylor has already become a fighter who can barely stack up the wins quickly enough and her almost hurried demolition of the Bulgarian was a masterclass in technical superiority, hand speed and variation.

It was also another valuable session in ironing out the kinks and creases of her new-found career.

“Yeah, I definitely needed the eight rounds I think,” said Taylor after the bout.  “Obviously, we are trying to progress fast, so that was a great, great contest for me against a very strong opponent. All credit to my opponent, she gave everything she had.”

Koleva was no different from the three that came before her, Taylor out-punching, out-moving, out-reacting, out-boxing and out-brawling the 28-year-old, who did well to see out the final bell.

Taylor had the fight won in the first round as she schooled Koleva with left jabs. That quickly gave way to a more aggressive mood triggered by an almost instant recognition after a few opening exchanges that she was a level above the former the world super featherweight challenger, who after 17 fights went into the contest with a 9-7-1 record.

Watched at ringside by Britain’s Natasha Jonas, who Taylor beat in the best of her fights leading to the London 2012 gold medal, talk was of a possible rematch.

The 32-year-old Liverpudlian, who does some work in television, is understood to be contemplating coming out of retirement to fight as a professional.

That’s another day but for now Taylor may quietly disapprove of being forced to go the full eight rounds, which she entirely shaped.

And if there is anything to pick over, anything that could be improved, it is developing a knockout blow. For all of the 30-year-old’s shots that got through and her dominance of the fight, Koleva bravely refused to concede and ended the fight on her feet.

There was a sense of frustration creeping in for the six-time amateur world champion and by the end of the bout she found herself rushing into some shots, proving perhaps there is never a perfect fight.

The first round was one of left jabs connecting; in the second a cracking left hook landed; the third saw some big right hands hit the target; the fourth witnessed some toe-to-toe action, with Taylor coming off best; the fifth was more rushed, but body punches hurt Koleva; in the sixth, there was more body work and uppercuts; the seventh Koleva fell to the canvas after 10 seconds when Taylor connected with a big left hook, followed by a short right; and round eight was equally dominant.

Punishing all the way, the rounds easily fell Taylor’s way 10-9 except the seventh, which she won 10-8, for an overall unanimous 80-72 win

“Hopefully two or three fights and I hope to challenge for a world title,” she said. “I’m definitely ready now. It’s great to be boxing on the undercard of the big bill.”

The win came just three weeks after the 30-year-old’s stoppage of Italian Monica Gentili in London, with the ‘big bill’ her next assignment in London on April 29th when Anthony Joshua faces Wladimir Klitschko under the Wembley Stadium arch for the IBF, IBO and WBA super heavyweight championships of the world.

It will be the second time in three years Eddie Hearn will have engineered an enormous stadium audience for boxing, the last time in 2014, when a packed house saw Carl Froch knock out George Groves. Joshua was the opening fight of that memorable night as he despatched Matt Legg after 86 seconds.

The eight rounds also takes Taylor closer to the coveted world title shot, which in an ideal career curve would take place in Dublin later this year over 12 rounds.