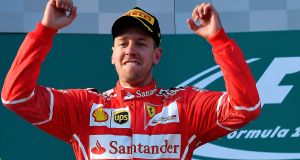 Pole-sitter Hamilton led the opening phase of the Albert Park race, but lost out to Vettel in the only round of pit stops and finished 10 seconds behind the four-time world champion.

It marked Vettel’s first victory since the 2015 Singapore Grand Prix with Valtteri Bottas, the Finnish driver who has replaced world champion Nico Rosberg at Mercedes, completing the podium.

Hamilton, who has now turned just one of his four pole positions here into victory, appeared to be in charge after nailing the start and beating Vettel on the relatively short run down to turn one.

And while Vettel was keeping the Mercedes man honest — with the gap under one second for the opening laps — Hamilton slowly began to eke out a lead over his rival. The result appeared a formality.

But the gap between the top two did not get to beyond two seconds, and when Hamilton, already starting to complain about his tyres, pitted at the end of lap 17, the Ferrari driver was back breathing down his neck. The gap was just 0.8 seconds.

Hamilton stopped for 3.3 seconds — it could have been quicker — and he left the pits behind Max Verstappen. It was the worst-possible scenario, and the triple world champion could not find a way round the 19-year-old Red Bull driver.

“It is race critical that we get past Verstappen,” came the radio message from his engineer Pete Bonnington. “I don’t know how you expect me to do that,” Hamilton responded. “There is no way I can overtake this guy,” an increasingly frustrated Hamilton added.

All the while Vettel was coasting off into the distance, and when he stopped for a fresh set of rubber, six laps later, he had built up enough of a gap to emerge ahead of the Mercedes car.

Vettel’s pit stop was also marginally quicker than that of Hamilton’s, and when the German returned to the Albert Park track, Verstappen, and crucially Hamilton, were both behind him.

Mercedes boss Toto Wolff, watching on from the team’s garage, furiously punched his fist on the desk, not once but twice. It was now advantage Ferrari. Indeed when Verstappen finally came in at at the end of lap 25, Hamilton was suddenly six seconds behind.

This was turning out to be a day to forget for Hamilton, and so, too, home favourite Daniel Ricciardo. The Australian had already stopped on his way to the grid — stuck in sixth gear — and while he later managed to start the race, albeit two laps down, he retired midway through. “Let’s get the f*** out of here,” a deflated Ricciardo said over the radio.

Back on the track Mercedes were considering whether to put Hamilton on ‘Plan B’ - presumably allowing the Englishman to push hard and stop again, before he was told they would be sticking to ‘Plan A’ — a one-stop strategy.

If Hamilton were to win this race then he would need to catch and pass Vettel. But rather than make gains on the Ferrari driver, Hamilton had his mirrors occupied by his new Mercedes team-mate Bottas.

There were further complaints from the Hamilton cockpit. “The power is dropping” he said with 11 laps left, and when Vettel crossed the line he was 9.9 seconds clear of the 32-year-old Briton. Bottas was just 1.2 seconds further down the road.

Kimi Raikkonen finished fourth while Verstappen crossed the line in fifth and Felipe Massa, the only other driver on the same lap as Vettel, finished sixth.

Fernando Alonso appeared on course to take home what would have been considered an impressive point given McLaren’s pre-season troubles, but he retired with only a handful of laps remaining with an apparent suspension problem.

British driver Jolyon Palmer has had a weekend to forget here, and despite running in 14th in the opening stages, he retired after 18 laps with technical gremlins.

“It’s unbelievable,” said Vettel after claiming the 43rd victory of his career. “It’s what we needed. The guys have been working really hard and not getting much sleep. It’s a really fun car to drive.”

Hamilton added: “A big congratulations to Ferrari and Sebastian. In the race, I struggled with the tyres. I had to stop very early and I got stuck behind one of the Red Bulls but that’s just the way it goes.”