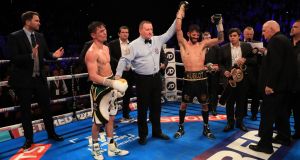 Anthony Crolla acknowledged he was beaten by the better man as Jorge Linares put on a classy performance to retain the WBA lightweight title at the Manchester Arena.

The Mancunian was bidding to win back the crown he lost to Linares at the same venue six months ago, but was totally outclassed on Saturday night.

Linares walked away with another unanimous points decision although victory was more conclusive this time, with all three judges scoring the contest 118-109 in his favour.

The Tokyo-based Venezuelan fired off dazzling combinations and rapid counters at will, while a left uppercut put the ever-resilient Crolla down on one knee in the seventh round.

Crolla, whose best work came behind the jab, rose with the support of a fevered crowd behind him and tenaciously battled back over the next couple of rounds, but his 31-year-old foe finished strongly and deservedly walked away with his world title as well as the coveted Ring Magazine belt.

“I’m obviously gutted about how the fight went. I thought early on I was landing a few shots to the body and I thought he slowed down when he didn’t,” Crolla said.

“He was sharp, he was accurate, I tried to force it but I lost to the better man, no excuses.

“His movement was very good, his variety was good, he came back better in most departments. I was very confident going in with the way we prepared and in the opening few minutes, but I lost to a top fighter.”

Linares may have proved he is the superior boxer over the course of their 24 rounds but Crolla showed immense courage to battle back after being knocked down by a peach of an uppercut.

After weathering the storm — with Linares going for the knockout — Crolla composed himself and backed the champion into the ropes in the final seconds of that seventh round.

Crolla added: “I imagine it was a good shot, the left uppercut that put me over. But after he put me over and he’d thrown a lot of shots, I’d recovered. I’d have liked that round to go on a bit longer because I thought I came back pretty well.

“It sounds stupid but the end of the round was probably better for him than me because I’d recovered and it was one of the times I’d had a bit of success.”

The 30-year-old, who revealed he was troubled by a rib injury from the fourth round onwards, has twice taken Linares the full 12 rounds — the only fighter to have done so.

However, his trainer Joe Gallagher was close to pulling him out at the end of the 11th, such was Linares’ dominance.

Crolla added: “You ask any fighter, it’s not me being brave, any fighter would want to carry on, wouldn’t want to stop with a round to go. And that’s all.

“I watched Jorge Linares years ago, he’s been around a long time. I was a fan of his and if it wasn’t me taking the punches I probably would have been admiring what he was doing.

“I felt I was coming in better than ever, the only thing for me is round four my ribs were sore throughout the fight. But that’s not to be used as an excuse, I lost to the better man.”