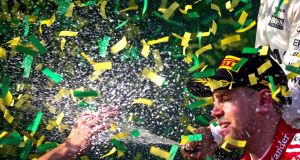 German Formula One driver Sebastian Vettel of Scuderia Ferrari celebrates after winning the 2017 Formula One Grand Prix of Australia at the Albert Park circuit in Melbourne. Photograph: Diego Azubel/EPA

Finally, it looks as if Formula One has a fight on its hands and after all the hope and expectation that has weighed heavily on the sport to fulfil with its reboot this year, Melbourne was a proper slug-fest between two of the biggest hitters of their generation; one that might yet be enjoyed all season long. F1 had set itself some ambitious targets and on the season’s opening weekend the race was a very palpable hit.

Sebastian Vettel’s victory for Ferrari, beating Lewis Hamilton into second and the Briton’s Mercedes team-mate Valtteri Bottas into third, was cause for huge celebration at the Scuderia. The Ferrari team principal, Maurizio Arrivabene, was left in tears of relief and joy after finally achieving this win.

Ferrari had played down their chances since testing and been somewhat perfunctory with the media – the emphasis has very much been on heads down and hard work – and it has paid off. If they continue like this, the methods will not be questioned.

It was reason for the sport itself to take a deep breath and relax after the tension that has accompanied the implementation of the 2017 rule changes. Three years of Mercedes dominance was ended in Australia by the victory Ferrari and Vettel had earned. Mercedes, drivers’ and constructors’ champions and untouchable since 2014, simply could not match them at Albert Park.

There are, however, some caveats before the mutual backslapping can begin. Albert Park is a street circuit and thus difficult to read too much into in terms of the season as a whole, but the fact that one team at least proved they can take the battle to Mercedes on merit is as much as F1 can have hoped for from the opener.

The focus of the new regulations has been on aerodynamics to make faster, more physically demanding cars to drive and that, too, seems to have been achieved. Certainly all the drivers like manhandling their new machinery but a huge question mark remains over the other consequence of that aero – as overtaking is more difficult.

Hamilton felt his chances were compromised, specifically because passing other cars had become more challenging. It will take more than one race for a definitive answer to this one – for the moment F1 must be satisfied with two teams at least appearing to be on a level playing field in terms of pace.

Indeed, the Mercedes executive director, Toto Wolff, was happy to concede that his team simply could not match Ferrari for speed – not an admission he has had to make for the past three years. “Some you win, some you lose and today Ferrari was the quicker car,” he said. “They put us under pressure straight from the beginning and that’s how we lost it.”

From Ferrari’s perspective, this victory is doubtless of far greater importance to the team than as a positive for F1 as whole. It is Vettel’s first win since he took the flag at Singapore in 2015 – which was also the last victory for the Scuderia. They have not won the constructors’ championship since 2008 and have managed only three wins in the three years of the V6-turbo-hybrid era. Any sense that this could be their chance to return to winning ways was going to seized upon.

Ferrari’s chairman, Sergio Marchionne, wasted no time in expressing his feelings, again reflecting just how momentous this single victory was to the organisation. “It was about time,” he said. “I am delighted for the team and for our tifosi who stood by us throughout this whole period. We’ve been waiting for this victory for almost a year and a half. Hearing the Italian national anthem again was very moving.”

Teamwork was key to the win – something that had been a weakness in the past. Vettel made a storming start here last year, scything up the middle between the two Mercedes to take the lead through the first corner, and should have gone on to victory but his team picked the wrong tyre strategy – and then did not win a race all season. This year they called this one to perfection and executed everything without a hitch to ensure the German could make the most of his chance.

Hamilton had warned that he had poor grip on the grid and had a bad start here last year but this time, poor grip or otherwise, he started with an inch-perfect launch – well clear of Vettel by the time they reached the first corner. However, under the new regulations, with the new cars, Mercedes were not able to disappear into the middle distance within a few laps as they have so often in the past three years.

Vettel was able to keep Hamilton well in sight, within a second and a half of the Mercedes, with stable balance and plenty of pace that augurs well for the whole year. Hamilton’s tyres, however, began to lose grip – something the team are investigating – and he pitted early, the first of the leaders to do so. He rejoined behind the Red Bull of Max Verstappen – which cost him time, between two-tenths and five-tenths a sector. The team pointed out he needed to pass the Dutch driver, to which a clearly frustrated Hamilton replied: “There is no way I can get past this guy.”

Hamilton had warned on several occasions before the season began that he believed overtaking would be difficult with the new formula because of the dirty air created by the focus on aero and it appeared he was experiencing the very issue he had predicted. Passing at Albert Park has always been tricky but after the race he reiterated his assertion that the cars simply could not get close enough to pass one another – and it remains the unspoken problem of the new formula.

Ferrari seized their opportunity. They kept Vettel out until lap 23, pitted and returned him to the track ahead of Verstappen and Hamilton, and into a lead he would hold until the end. Hamilton could do nothing to catch him and the margin was 9.9 seconds by the time the flag dropped.

The reboot has worked in Australia. The ticket sales in Melbourne were up by 10 per cent and fans were treated to the most positive start that the sport might have expected. It is not yet job done, however, either for Ferrari or F1. As Marchionne also noted. “It is absolutely essential to remember that this is not the destination,” he said, “but the first step on a long road that must see us all focused on improving each and every day.” Guardian Service