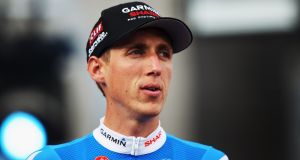 Dan Martin moved up five places in the general classification on Friday’s fifth stage of the Volta a Catalunya in Spain, with a solid climbing performance to Lo Port de Tortosa leaving him in ninth place overall.

Martin was unable to stay with big guns such as Alejandro Valverde (Movistar), Chris Froome (Sky) and Alberto Contador (Trek), with these three going on to fill the podium places on the stage. However, he rolled in 46 seconds back, placing sixth on the stage.

The WorldTour event continues on Saturday with another tough mountain stage to Reus. It concludes in Barcelona on Sunday.