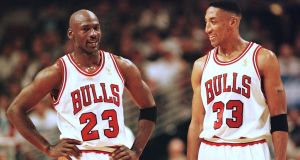 Scottie Pippen has reportedly joined a growing chorus of former Chicago Bulls to take issue with Michael Jordan’s outsized influence on The Last Dance, the wildly popular ESPN/Netflix docuseries on the team’s 1990s glory years which concluded on Sunday night.

Pippen, the Hall of Fame small forward and Jordan’s most important teammate during their imperious march to six NBA championships in eight years, is “beyond livid” with his portrayal in the 10-part series, a Chicago-based ESPN Radio host said on Wednesday.

“He is so angry at Michael and how he was portrayed, called selfish, called this, called that, that he’s furious that he participated and did not realise what he was getting himself into,” ESPN 1000’s David Kaplan said on the Kap and Co radio show.

Some critics have noted the hit series, which tells the story of the Bulls’ dynasty through the lens of their final championship run during the 1997-98 season, relies too much on the perspective of Jordan, who maintained final cut and editorial control of the production – and Pippen appears to be among them.

Present-day interviews in early episodes of the series include Jordan calling his long-time wingman “selfish” over a contract dispute and casting a doubting eye on the migraine that compromised Pippen’s performance in Game 7 of the 1990 Eastern Conference finals, where the Bulls were defeated by the Detroit Pistons.

Another episode devotes a lengthy segment to Pippen’s infamous decision to not re-enter Game 3 of Chicago’s 1994 Eastern Conference semi-final series against the New York Knicks for the final 1.8 seconds because Toni Kukoc was given the final shot over him.

“I would say [the documentary was] entertaining, but we know, who was there as team-mates, that about 90 per cent of it [was] BS in terms of the realness of it,” Grant said in an interview on ESPN 1000’s Kap and Co radio show on Tuesday. “It wasn’t real – because a lot of things [Jordan] said to some of his team-mates, that his team-mates went back at him. But all of that was kind of edited out of the documentary, if you want to call it a documentary.”

Jordan is depicted as a man ruthlessly devoted to winning in The Last Dance, even if it comes at the expense of his personal popularity. Grant, who was with the Bulls for seven years, said Jordan sometimes went too far.

“He felt that he could dominate me, but that was sadly mistaken,” Grant said. “Because whenever he went at me, I went at him right back. But in terms of Will Perdue, Steve Kerr and the young man, Scott Burrell, that was heartbreaking [to watch]. To see a guy, a leader, to go at those guys like that. I understand in terms of practicing, you have a push and shove here and there, but outright punching [team-mates] and things of that nature. And calling them the B’s and the H’s, that wasn’t called for.”

In May, ESPN’s Jackie McMullan hinted at Pippen’s disappointment with the production, saying: “Those close to him say he’s wounded and disappointed by his portrayal.” – Guardian