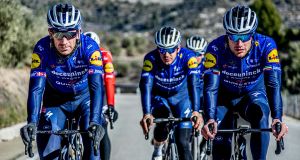 It’s the first time Bennett and Cavendish will ride on the same team, at different but perhaps no less meaningful points of their career, both riders seated next to each other at the Deceuninck-Quick-Step virtual presentation from its opening warm-weather training camp of the new season in Altea in southeast Spain.

For Bennett, 30, in his second season of a two-year contract with his self-professed “dream team”, it also presents the chance to learn something from Cavendish, who turns 36 in May. He returns to the Deceuninck-Quick-Step team he rode with between 2013 and 2015, during which time he helped bring his Grand Tour stage winning tally to a record 48 wins, including 30 in the Tour de France.

At the end of the 2020 season, Cavendish found himself out of contract with Bahrain-McLaren and his career seemingly over, before Deceuninck-Quick-Step chief executive Patrick Lefevere announced his re-signing in December.

Asked what Cavendish might bring to the team and indeed Bennett’s own goals for 2021, the Irish rider suggested a rider of his experience can only be beneficial as Bennett goes about increasing his own Grand Tour stage tally: he’s so far won eight, including two in last year’s Tour de France, and three each in the Giro d’Italia and the Vuelta a España.

“I suppose just how to approach things, mentally, and deal with pressure,” said Bennett. “He [Mark] is a guy who has dealt with expectation, and he’s a guy who if he came away with two Grand Tour stages, in the one Grand Tour, people would be saying it was a bad one for him.

“So he set the bar really high for himself, and there was always that expectation, so I think I can learn from his experience, his mind frame, and how he approaches the big races.”

“Well I don’t know if I can top that [2020],” said Bennett, “but I’d like to go back and try get more stage wins, and just see how it goes in trying to defend the green. I’d also really like to go for something like Milan-San Remo, try get a one-day World Tour win, so they’re the main ambitions of mine for the season.”

Bennett and Cavendish have another link in that Bennett’s breakthrough win in the professional ranks came on Stage 5 of the 2013 Tour of Britain, where Cavendish was among the favourites he beat on the day, before Cavendish just got the better of him in the final sprint finish in London.

Cavendish was adamant he wasn’t trying to turn back the clock, only insistent he could still bring something to the bunch sprint, considered by some to be at its most competitive in years: “Well I’ve not a clue what they’re like, because I was never close to them in the last few years,” said Cavendish, who also won the 2011 World Championships, and the 2009 Milan-San Remo. “But hopefully I can be in the mix this year, whether that’s sprinting for the win, or helping one of the lads win.

“Look, if I thought I was going to win six stages in the Tour de France again, I’m in fairytale land. It makes it even less likely when you come to the strongest team in the world. If it was about trying to win what I have previously, I’m a realist. I’m not looking to hang on to anything, I just know I’m just still good, and all you can do is look forward, and stay strong. Even if I’m not winning, I still believe I can add something to this team. Ultimately I was happiest when I was here, and the opportunity to come back here is a dream.”

Along with Bennett, the Deceuninck-QuickStep sprint roster already includes Alvaro Hodeg and Fabio Jakobsen, who is back riding after the serious injuries sustained crash on the opening stage of the Tour of Poland in August.