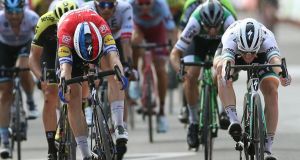 Sam Bennett came up fractionally short at the end of stage four of the Vuelta a España on Tuesday placing a very close second to Fabio Jakobsen (Deceuninck QuickStep) at the finish in El Puig.

Bennett inadvertently took a longer way around a roundabout in the finale and lost contact with his Bora-hansgrohe team’s lead-out train. That meant he had to fight his way back into contention and that led to a lot of shoulder-bumping with other riders. The 28-year-old was still quite far back when the sprint opened up and while he was by far the quickest rider in the final 100 metres Jakobsen’s advantage was enough to just hold off the Irish sprinter.

The gap shown by the photo finish was a few millimetres, had the line come even a metre later Bennett would have won his second successive stage. He was disappointed but had the consolation of taking the points jersey.

“That one hurts a lot ” Bennett said pointing out that sprints don’t always go to plan. “There was nothing else we could do. We had to use our riders early. I couldn’t get the right position and went the wrong side of the roundabout in the last kilometre.

Bennett has had a superb year with 12 victories thus far. He said that being the big favourite for the Vuelta sprints complicates things. “There is a bit of pressure. Each day I wonder how I am going to do it again but every day I seem to be close. So I should be more confident.”

Nicolas Roche (Team Sunweb) rolled in as part of the main bunch placing 74th. He defended his overall lead and will head the general classification again in Wednesday’s stage. With Roche in the red jersey and Bennett now in the green as points classification leader it means that the two top competitions in the race are now topped by Irish riders.

“It is fantastic I am really proud to wear this ” Bennett said referring to the green jersey. However he pointed out that the points classification in the Vuelta a España is different to that of many other races. “It is very hard when it is normally a climber who takes it. Now we are going to start the climbs and I can do nothing about the other guys.”

Bennett’s tactic will be to scoop points whenever he can as well as trying to grab another stage win when the race returns to flatter terrain on Saturday.

Wednesday’s stage to the Observatorio Astrofísico de Javalambre is the first uphill finish of the race and with former Vuelta winner Nairo Quintana (Movistar) just two seconds behind Roche overall it is very possible that the Irishman will slip back. However he will do what he can to defend the race lead he grabbed when he finished second on Sunday’s stage.

1 Jack Nicklaus’ Trump endorsement leads to avalanche of dismay
2 England lay down marker for Ireland after bonus point win in Rome
3 Six Nations - France v Ireland: Kick-off time, TV details, permutations, team news and more
4 Ireland, France or England? Who needs what to win the 2020 Six Nations
5 World Handicap System: What is it? How does it work? Will my handicap change?
Real news has value SUBSCRIBE