Sailing: Alex Barry ready to defend his title at Mullingar 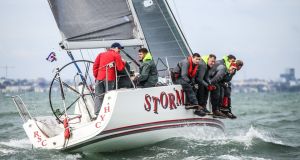 Irish Sailing’s All Ireland Championships – an event that celebrates its 70th anniversary this year – sets sail in GP14 dinghies on Saturday at Mullingar Sailing Club.

Defending champion Alex Barry, second and third in the previous two editions, is confirmed but there will be no quarter given when the Cork Harbour ace lines up against 15 key dinghy and keelboat rivals, including Greystones Sailing Club invitee Shane MacCarthy, the current GP14 World Champion.

Tokyo Olympic trialist Aoife Hopkins lies 11th overall after five races sailed at this week’s Laser Radial European Championships in Barcelona. The Mediterranean event was delayed due to the Catalonian strike but got underway on Wednesday.

Pat Kelly’s Storm from Rush Sailing Club defends its J109 national title this weekend in one of the key cruiser-racer events of the season.

ICRA has confirmed Galway Bay as the venue for its 2018 championships. It’s the first time the event has sailed out of Galway but its not the first time on the West coast.

It was previously hosted by County Kerry’s Tralee Bay Sailing Club in 2013 when it ran concurrently with the West of Ireland Offshore Championships, as it will do again next August 15th-18th.

County Meath Mini-Transat sailor Tom Dolan has recovered from a costly setback at the start of last Sunday’s race from La Rochelle.

The solo helmsman missed a mandatory mark on the course having been in the lead. He was forced to retrace his steps in poor visibility. This put him in last place for a period in the 56-strong Production class, but he is now up to 14th. Light winds are expected this weekend as the fleet close on the Canaries.

Youth sailors are back on the water this weekend for 29er skiff ‘try-out sessions’ in Dun Laoghaire Harbour.

The initiative, by the Royal St George Yacht Club (RStGYC), is to help “keep sailors in the sport at a time when all clubs are challenged to keep their youths”, explains sailing manager, Ronan Adams.

It’s not the only RStGYC regeneration initiative currently underway either. The waterfront club also announced this week the purchase of an eight-boat J80 fleet.

Outlining the ‘exciting development’, Club Commodore Michael Pomeroy says the initiative is to ‘meaningfully re-engage with the 25 to 50-year-olds and to create a less time consuming more value-driven racing environment for young adults’. The one-design boats were previously owned by the Irish Sailing Association (ISA) and purchased in 2007 with a sports capital grant.

Also at the RStGYC, another initiative to grow team racing in Leinster gets underway on Saturday (7th October).

Dublin University Sailing Club is hosting the first of four league events. Although the league will be held in Dublin, anyone from around the country is welcome to enter a team regardless of age or ability. The league aims to build on last month’s Elmo Cup momentum and bridge the gap to college team racing.

That’s something that might appeal to Ireland’s newest sailing club, formed in Cork Harbour last month.

Blackrock Sailing Club is currently without a clubhouse but that has not stopped a group of sailors from setting sail on the city’s River Lee in refurbished Firefly dinghies, a popular team racing type.