Patriots need to make a case for the defence 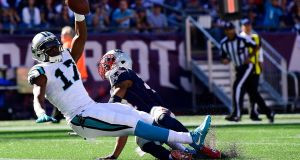 By now, the NFL should know that the New England Patriots treat the first month of the season like an extended training camp. Of course the Pats try to win their first four games but the winning sometimes seems secondary to the bigger goal of trying to build a champion at season’s end.

“They are definitely a better second-half team,” former NFL general manager and current NFL Network analyst Charley Casserly told me a few weeks ago. “It seems the players learn the system more then and Bill Belichick learns more about the players and then they get better and better as the games go on.”

This is why New England’s 2-2 start after Sunday’s 33-30 loss to the Carolina Panthers shouldn’t be seen as proof that the Patriots are falling apart. The 2011 lockout produced a collective bargaining agreement that cut offseason and training camp practice time. Ever since, Pats coach Belichick has tried to experiment in September and early October, testing players in certain situations and showing plays that will complicate the preparation of coaches who have to plan against them later in the year.

Often, Belichick’s early tinkering leaves the Patriots looking sluggish and leads to early and mid-October storylines of the “What’s wrong with the Patriots?” variety. Usually, they turn out to be just fine, storming through November and December to division titles and deep post-season runs. Already this season Tom Brady has thrown for 1,399 yards and 10 touchdowns against zero interceptions. He is playing as well, at the age of 40, as he has in his career. Even with Julian Edelman out for the season with a torn ACL, he has found ways to find his other top targets, including tight end Rob Gronkowski and receiver Danny Amendola. The Pats offensive line continues to give him time to fire passes all over the field.

But New England’s defence is struggling. A lot. Brady might be great, but as his wife, Gisele Bundchen screamed after dropped passes cost the Pats Super Bowl XLVI: “My husband can’t fucking throw the ball and catch the ball at the same time!” In this case, Brady can’t throw the ball and stop opposing attacks.

Going into this season, the defence was expected to be a weakness but few would have predicted New England would give up more than 30 points a game. No matter how great Brady looks, no team can give away that many points each week and expect to go to the Super Bowl. In Sunday’s loss the Pats defenders missed tackles and blew coverages in allowing the Panthers to put up 444 yards. Carolina quarterback Cam Newton had 316 yards passing and four touchdowns (three passing and one running).

Newton, of course, is less than two years removed from an MVP season; there is little shame in having him dominate a game. Still, New England are known for adapting week-to-week to the other team’s best player and the Patriots appear to be adapting to no one right now.

Maybe everything will turn out to be fine. Maybe this September glitch that has bled into October is nothing. Maybe January ends with the Patriots heading off to another Super Bowl in a blizzard of confetti.

Something doesn’t seem quite right with the Pats defence, however. Something that might not be fixed with a few magical film sessions and a snap of Belichick’s fingers. And that should be the worry today for the team that was supposed to go undefeated.