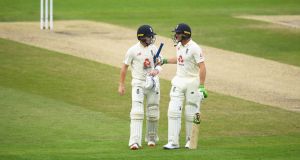 Ollie Pope and Jos Buttler leave the field as bad light stops play during day one of the third Test between England and West Indies. Photo: Gareth Copley/Getty Images for ECB

Ollie Pope picked a very good time to deliver. England decided to drop a batsman for this Test since Ben Stokes is not expected to bowl; in their calculations the selectors would have considered which of two men to leave out, Zak Crawley or Pope. Crawley, despite his 76 in the first Test, was the man to stand down and that looked like the right decision as Pope played an innings of rare quality and fluency on another absorbing day. His unbeaten 91 allowed England to reach 258 for four when the umpires surprisingly detected bad light.

Initially England coupled a bold team selection with some cagey batting until Pope seized the initiative in the final session. His footwork was nimble and positive, his eye sharp. Sometimes he pulled short balls from Shannon Gabriel off the front foot; a good eye is essential to do that and his cover driving, reminiscent of Ian Bell, would have had a crowd purring. In his unbroken partnership of 136 with Jos Buttler there was no doubt who was the senior partner; for much of the time Buttler merely looked on admiringly though by the end he was also playing with renewed composure.

In their selection England made the taking of 20 wickets their priority, which was understandable given that they have to win the Test and the weather forecast suggests that there will be interruptions. Meanwhile the West Indies selected an additional spinner, Rahkeem Cornwall, instead of Alzarri Joseph. Even so they opted to bowl first.

Given the slender look of the English batting lineup losing Dominic Sibley to the last ball of the opening over from Kemar Roach was not ideal. Having watched four deliveries pass harmlessly by to the wicketkeeper Sibley failed to make contact with the fifth one which swung in and struck the left pad. Sibley, correctly, declined to review.

So Joe Root, back at No 3, which is not his favourite position, was at the crease within five minutes of the start and it was a struggle for him. Roach, in particular, was making the odd delivery swing; so too was Jason Holder, who was on early because Gabriel had to leave the field in the middle of his fourth over, though he would return later to bowl his quota of overs.

Progress was slow and unsteady but Rory Burns and Root battled away for over an hour, by which time Cornwall had bowled his first deliveries in Test cricket in this country. Cornwall does not have a run-up, just a slow walk-up after which he propels the ball from a great height usually in the right direction. Early on he spun a ball past Burns’s outside edge. He cuts an incongruous, intriguing figure, but he certainly gave the impression that he knew what he was doing even when Root sought to disrupt him with the odd paddle sweep.

The England pair tried to create some momentum. Perhaps the odd stolen run would help. So Burns dabbed the ball square on the off side and invited a single by moving down the pitch; Root accepted the invitation but not quite swiftly enough. A brilliant throw from Roston Chase trimmed the bails before the ball came to rest in Shane Dowrich’s gloves, a rarity on a nightmarish day for the wicketkeeper, when Root was three inches short of his ground. So England’s captain had been run out for the second time in succession.

Stokes, up at No 4, an appropriate place for the third best batsman in the world in the ICC rankings, was back at the crease. He settled in dutifully like a specialist rather than an all-rounder with licence but Roach defeated him before he could do much damage. He bounced Stokes, who was hit on the helmet and there was a delay for the batsman to have a brief concussion test. Roach sent down another bouncer which was imperiously hooked for four; then he pitched fuller from around the wicket and the ball squeezed through the gate to hit the stumps. So England’s two best batsmen had gone before the total had reached three figures.

Burns has struggled against Chase in this series so it was a surprise that he was not introduced until the 46th over notwithstanding the presence of Cornwall. Burns went for the cut and the ball flew rapidly from a top edge towards first slip where Cornwall held a superb reflex catch.

Pope changed the mood of the match and the tempo of the run-scoring after tea. Holder may have erred by persisting with pace from both ends with an old ball that was now declining to misbehave. Then he leant upon his spinners until the advent of the second new ball, by which time Buttler was gaining in confidence and he hit Cornwall for two effortless sixes over midwicket. Meanwhile Pope was prepared to milk the spinners like an old pro, albeit an unusually fleet-footed one.

Holder delayed taking the new ball until the 83rd over, presumably because he reckoned that his pacemen were running out of energy. By this time Buttler had posted his first 50 for England since the Oval Test against Australia last September. England had taken charge with the comforting knowledge of possessing a pace attack that should have plenty of fuel in their tanks. – Guardian