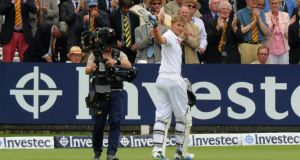 Joe Root proved his worth with ball as well as bat to end Australia’s afternoon resistance and keep England on target for a 2-0 Ashes lead at Lord’s.

Captain Michael Clarke (51) and Usman Khawaja (54) responded with half-centuries in a stand of 98 - but when Alastair Cook summoned England’s batting hero Root in his secondary role as a part-time off spinner, he saw off the fourth-wicket pair in successive overs.

Tim Bresnan then chipped in with the wicket of Steve Smith, caught behind off an inside edge even after Australia had chanced their second DRS review, in a teatime 136 for six which made it highly likely England would win here with a day to spare.

After Root could add only two runs to his overnight 178 in the hosts’ 349 for seven declared this morning, Swann - who had taken five wickets in Australia’s hapless first-innings 128 - quickly added two more.

James Anderson gave England their first breakthrough, Shane Watson lbw in predictable fashion - for the 10th time in 19 innings against England - pushing forward in defence but missing an inswinger.

Swann was called into the attack for only the 10th over, and England’s most obvious wicket-taker in these conditions struck for the first time with only his fifth delivery.

Australia’s legion of left-handers were doubtless having nightmares about the rough outside their off-stump and what Swann might do with it.

Chris Rogers was surely mindful of that when he left an arm ball and was bowled off-stump, another example of Swann’s knack of taking a wicket in his first over but a rarity perhaps in that he did so with a delivery which did not turn.

Phil Hughes also went to Swann before lunch, lbw to an off-break which turned only marginally but enough to beat bat and be headed for leg-stump - a point proven by Hawkeye as Australia lost their first review.

Had Matt Prior then completed a straightforward stumping when Clarke went on the charge and missed a Swann arm ball, the Australia captain would have been gone for two out of 38 for four.

Instead, he and Khawaja batted through most of the afternoon until, after 17 straight overs from the nursery end, Swann was replaced by Root.

Alastair Cook brought himself in at leg-slip for the new bowler, and two balls later the captain took the reaction catch when Clarke guided one to him off the face of the bat.

It seemed a hammer psychological blow for Australia to lose their captain, and so it proved - the first of three more wickets for just two runs.

Root had Khawaja edging a sharp catch to gully, and then Bresnan saw off Smith with the final ball of the session.

Root had earlier fallen short of an Ashes double-century, and so hastened England’s declaration.

The hosts, who lost just two wickets in the entire third day, did likewise in 15 minutes of the fourth morning.

The presumed prime intention of batting on was to allow Root an opportunity to convert his overnight 178 not out into a maiden 200. But after losing Jonny Bairstow caught behind trying to force back-foot runs off Ryan Harris to end their stand of 62 and then seeing Prior poke a simple return chance back to Ashton Agar only to be dropped on one, Root himself succumbed.

His attempt at a cheeky ramp shot over his left shoulder off Harris instead looped down to third man to give the Australia seamer two wickets in four balls and end Root’s near eight-hour stay as well as the England innings he had overseen throughout.

1 Serpentine stays on from the front to steal Epsom Derby for Aidan O’Brien
2 Eamon O’Shea: We spent quite a bit of time talking about older people rather than to them
3 Love tears them apart in stunning Epsom Oaks romp
4 Monica Seles: The warrior queen who could have been the best ever
5 Glorious Greenwood as Man United thrash Bournemouth
Real news has value SUBSCRIBE

Arsenal check Wolves to relight their European fire 19:41
Leeds move four clear as Brentford add to Wigan woes 18:07
Jamie Vardy reaches his century to get Leicester back on track 17:38
Glorious Greenwood as Man United thrash Bournemouth 17:28
Serpentine stays on from the front to steal Epsom Derby for Aidan O’Brien 17:24
Here is your handy guide to sport on television this week