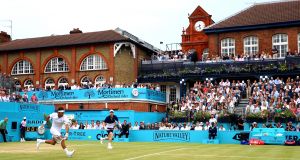 Queens in London. The west Kensington club may be exclusive but it’s popularity is undimmed and it boasts a 15-year waiting list.

Andy Murray has won it five times. Rafa Nadal, Andy Roddick, Pete Sampras, Boris Becker, John McEnroe and Jimmy Connors all stack up in the roll of honour at Queens.

The tournament in June is the club’s crown jewel. But for the other 51 weeks it’s a private club for 4,500 members. Pippa Middleton and her older sister Kate, the Duchess of Cambridge and Prince William play their tennis there as does billionaire investor George Soros.

They are in good hands. One of the most famous clubs in tennis is being run by Irishman Ross Niland, who quit a career in banking last summer to take on the role of chief executive.

A brother to Ray, who played rugby with Garryowen and Lansdowne and to former tennis professional and Davis Cup captain, Conor, and Federation Cup player, Gina, Ross left the currency markets in JP Morgan and Deutche Bank to come back to the sport he once played at international level.

“I played for Ireland but I didn’t play Davis Cup although I played with Owen Casey in a four nations,” he says. “I played with Munster for god knows how long. Then I went off to university did a post grad and got an Oxford Blue. Obviously Conor was exceptional and Gina had a pretty phenomenal career as well.

“The business of sport is always something I’ve loved. Then this role in Queens came up. Actually I was club captain at Queens as well and won the singles, doubles and mixed back in ’02 so I knew the club well. I wasn’t a member when I applied. I threw my hat in the ring and got it.”

The west Kensington club may be exclusive but it is also in demand with a 15-year waiting list. Full membership is £2130 (€2428) with members also required to purchase a redeemable share when joining. The share price is currently £15,000 (€17,100) and is subject to change without notice.

This year’s tournament has been cancelled along with the rest of professional tennis because of Covid-19 and while that will hurt the club’s finances, with the loss of Fever-Tree sponsorship and other money makers around the week-long event, the club will manage.

“I guess there are two aspects to it,” says Niland. “One is running a club of 4,500 members, and all that entails, 105 staff and catering, a team of 35 grounds men and everything else. The really interesting thing for me is the tournament. You run the club for 11 months of the year and then you’ve got the event. We run the event with the LTA. The LTA do all the heavy lifting around it so it’s kind of two jobs in one. Of course my first year in it there is no tournament.

“We are in a pretty healthy financial position as a club. But the tournament does help a lot financially. With it not happening this year we have no revenue from that. We are in the hole for a material amount of money but it’s not going to kill us.”

The club has 28 outdoor courts and eight indoor. It is also the national headquarters of real tennis and has rackets and squash courts. Original owners the Lawn Tennis Association (LTA) sold the out to the members in 2007 for £35 million (€39.9 million) and relocated their National Tennis Centre to Roehampton, where the qualifiers for Wimbledon are staged.

“Federer plays in Halle. But if you look at winners of Queens over the last 30 years, you have the greats of the game,” he says. “Djokovic has never won it, lost in the final. Nadal has won it, McEnroe, Connors, Becker and Hewitt too. All the top players.

“It’s not often those guys spend a month in the same city. They come over after the French Open. They know the exceptionally quality of the grass courts. Then after Queens they have a practice week and play Wimbledon. They like the atmosphere of thee whole thing as well.”

On Wednesday the club opens as part of the UK’s opening up. A little later than usual but the first season for the Irish chief tentatively begins.

Everton edge Southampton; Gordon Elliott hit with interim British ban 07:27
Owen Doyle: Calamity in Cardiff is hard to get your head around 06:00
Budd Schulberg: The screenwriter who made Marlon Brando a star 06:00
Jack Conan makes an impact as he returns in Rome 06:00
Gerry Thornley: Wales have the momentum to claim Grand Slam 05:00