Toni Nadal says it is natural for coaches to encourage from sidelines, despite rules 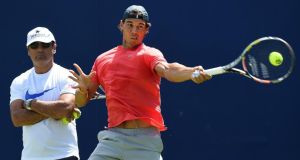 Toni Nadal, the coach and uncle of Rafael Nadal, believes it is impossible for a coach not to encourage and communicate generally with a player during a match.

The issue of coaching from the sidelines has been a controversial one at SW19 this year with the Wimbledon champion, Novak Djokovic, fielding numerous questions regarding a controversial debate that has escalated following an interview given by his coach, Boris Becker.

Becker stated that Djokovic’s team sometimes provide verbal assistance to the Serb during matches. Section VIII (i) of the ATP’s rulebook states: “Players shall not receive coaching during a tournament match. Communications of any kind, audible or visible, between a player and a coach may be construed as coaching.”

Nadal, who has coached his nephew to 14 Grand Slam titles, does not expect the rules to change because the tennis authorities rarely modernise the regulations. The 54-year-old also said it is natural for coaches to encourage on the sidelines.