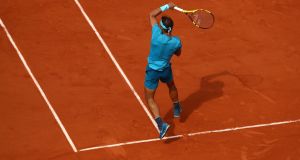 Rafael Nadal of Spain plays a forehand during his men’s singles third round match against Richard Gasquet of France during day seven of the French Open at Roland Garros. Photo: Cameron Spencer/Getty Images

Rafael Nadal swatted aside the latest challenge to his seemingly inexorable march towards an 11th French Open title.

The Spaniard’s strength and power on his favourite surface was too much for French 27th seed Richard Gasquet in an emphatic 6-3 6-2 6-2 win.

Nadal has yet to drop a set in this year’s tournament and has now won 34 consecutive sets at Roland Garros. Most observers, and probably most players, feel he is currently invincible on the clay of Paris.

However, Nadal said: “I don’t know what the others think. All I know is about me.

“What I know is I go to the court, and I know that I could very well lose. I can win, I can lose. I don’t come here saying ‘you can’t win against me’.

“Of course I have won a lot, and it can maybe influence my opponents. But that’s their thing. It’s their problem. I can’t answer about that.”

Germany’s Max Marterer, the 22-year-old world number 70, is next up to have a shot at the world number one in the last 16.

“I need to take care about what’s going on. I hope to be ready to play a good match,” added Nadal.

“I think I’m improving, too, every day. Playing better and better. And that’s my goal and my way.

“Richard is a good friend and is a nice person. We grew up together, with a lot of talk between both of us when we were kids. Now we’re older, that’s all.

“It was a great feeling. It was emotional thing for me to play with him here on this court.”

Croatia’s Marin Cilic, the third seed, came through with no fuss 6-3 6-2 6-4 against American Steve Johnson.

The Belgian appeared to exchange angry words with his opponent during one changeover after Monfils was given a time violation before running out 6-7 (6/8) 6-3 4-6 7-5 6-3 winner.