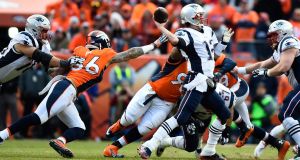 During the build-up to the AFC championship game in the Mile High City, the spotlight was fixed on Manning and Brady, the two future Hall of Fame quarterbacks who were meeting for the 17th, and perhaps final time.

But it was the Denver defence that stole the show, intercepting Brady twice and making two crucial fourth down stops late in the fourth quarter to snuff out potentially game-tying scoring drives, including one with just 2:18 on the clock.

The Patriots, however, would not quit and with 12 seconds left to play Brady hit Rob Gronkowski with a four-yard touchdown pass.

Needing a two-point conversion to force overtime, the Denver defence again dug in forcing Brady to make a hurried incomplete pass to clinch a spot in their record-equalling eighth Super Bowl.

Manning, who had been plagued by injury and questionable form all season, turned in a performance worthy of a five-times NFL most valuable player, tossing a pair of first-half touchdowns to Owen Daniels.

Tipperary consign Leitrim to relegation into Division 4 19:32
Jacob Murphy snatches a point for Newcastle at Wolves 19:14
Munster ring the changes again for Cardiff’s visit 19:12
Camogie: Rockett fires two goals as Waterford edge closer to quarter-finals 19:00
Dan Martin back to third in Vuelta after a wet and wild Stage 6 18:51
Here is your handy guide to sport on television this week