Djokovic hasn’t dropped a set in his opening four games 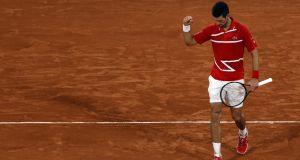 Novak Djokovic celebrates after beating Karen Khachanov in their men’s fourth round match at Roland Garros in Paris, Photograph: EPA

Novak Djokovic surges on, Alexander Zverev goes home to heal his ailing body and the most extraordinary French Open in living memory enters the second week burdened with fresh concerns about coronavirus.

When Zverev departed Roland Garros, sweating from an undiagnosed fever he had failed to report before losing to Italy’s Jannik Sinner in the fourth round, some of those still involved in the tournament were left to wonder about their own health. They are still wondering.

Federation Francaise de Tennis (FFT) on Monday declined to add to its statement of the previous evening that Zverev was “up to date” on his Covid tests, all negative, even though the most recent of them was on September 29th. The federation confirmed that he did not consult a tournament doctor before the match, despite feeling unwell, and did not respond to a reminder that he was due another test that day.

So, Zverev could be at home in Monte Carlo recovering from a virus that last month prevented his mother and father from attending his final of the US Open, or he could be up and about partying within days - as he did after Djokovic’s Covid-wrecked Balkan exhibition tour in June. His agent, Team 8, which also acts for Roger Federer, did not respond to inquiries.

Under the roof of Court Philippe Chatrier, meanwhile, as rain splashed the outside courts on day nine, Djokovic strengthened his title claims by beating the Russian Karen Khachanov 6-4, 6-3, 6-3 to join Stefanos Tsitsipas and Andrey Rublev in the quarter-finals from the top half of the draw.

Khachanov, the No 15 seed, reminded Djokovic of the high-grade tennis he brought to his only win over him in four attempts, in the Paris Masters final two years ago, but the world No 1, unbeaten in 35 completed matches this year, accelerated through the gears to finish the job in two hours and 23 minutes.

“It was pretty competitive, very equal,” Djokovic said courtside, adding that his continued use of the drop shot was designed “to change the pace a lot against Karen, who is a powerful player. I tried to move him from the back of the court. I’m just very happy to have reached this stage of the tournament without having lost a set. Now I’m in the quarter-finals, and on we go. Vamos.”

Tim Henman, on Eurosport, spotted that Djokovic inadvertently struck another line official - this time in play while returning serve - and said: “It’s a nightmare. It was a great serve out wide from Khachanov and the ball skidded off the line. Novak is at full stretch and hits the line judge. Obviously totally different circumstances [to New York, where he was disqualified last month]. This was in play - but I’m sure Novak had his heart in his mouth.”

Djokovic said later: “It was very awkward deja vu. I hope he is all right. I will try to see him.”

As for absent friends, Zverev’s silence on a day when Paris was placed on maximum alert over the virus, with all bars closed for a fortnight and security tightened at hotels and restaurants, has left a worrying vacuum in accountability.

Sinner, who plays Rafael Nadal in the quarter-finals on Tuesday, said: “I don’t think that I will have fever next days - or I hope [NOT]. Maybe I have. I mean, you never know about that.”

Rublev said after beating the unseeded Hungarian Marton Fucsovics 6-7, 7-5, 6-4, 7-6 on Court Suzanne Lenglen before the rain to book a quarter-final against Tsitsipas, that he tested negative on Sunday - five days after Zverev’s last. “I did three or four tests in total.”

It has also emerged that the Pullman Paris Tour Eiffel, one of two hotels housing players and their teams, is far from biosecure. According to the New York Times, almost half of the 430 rooms were kept for guests, and Sam Querrey claimed tourists staying in the room next to Zverev returned each night with souvenirs from the nearby Eiffel Tower. “The hotel is not really a bubble,” the American said.

Back on court, before Tsitsipas and Djokovic, Petra Kvitova was the first victor of the day on Philippe Chatrier, easing into her second Roland Garros quarter-final when she defeated Zhang Shuai of China 6-2, 6-4. She will face Germany’s world No 66, Laura Siegemund, who beat Paula Badosa 7-5 6-2.

Kvitova, who made her comeback on the same court in 2017 six months after a knife attack, said: “ I got a bit emotional last two points of my match. My memories, happy memories, when I made my comeback here 2017, when I step on the Philippe Chatrier, I couldn’t really imagine me to be in the quarter-final of this slam. It’s been a long ride definitely.” - Guardian