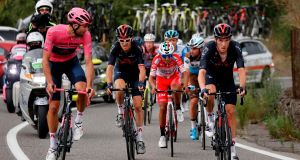 Geraint Thomas (centre in black) in action during the third stage of the Giro d’Italia between Enna and Mount Etna in Sicily on Monday. Photograph: Luca Bettini/AFP via Getty Images

Geraint Thomas’s Giro d’Italia challenge was effectively over before the first climb on Monday after the Ineos-Grenadiers rider was dropped during the third stage following an early crash.

Britain’s 2018 Tour de France champion hit the ground in the neutral zone before the start and lost touch with the main pack ahead of the final ascent to Mount Etna, an 18.8km effort at an average gradient of 6.6 per cent.

On a bad day for British riders, Simon Yates of the Mitchelton-Scott team was dropped about nine km/h from the finish, losing 3:31 to the other leading overall contenders.

“It was about limiting our losses,” said Mitchelton-Scott sports director Matt White. “It’s a long race, everyone has a bad day. Unfortunately for us it’s early in the race.”

“We’re looking at the race from a different angle. Now we’re coming from behind.”

Portugal’s Joao Almeida took the overall leader’s maglia rosa a fraction of a second ahead of Caceido, who might regret celebrating his stage win before crossing the line.

“I cannot describe this feeling,” said Deceuninck-Quick Step rider Almeida, who will have to be closely monitored by the top contenders in the coming days.

“It’s a dream come true. I tried to do my best on the climb and stay with the main favourites for the general classification.”

It has been an eventful start to the rescheduled grand tour after Fuglsang’s Astana team were hit when key climber Miguel Angel Lopez crashed out in the opening time-trial and co-leader Alksandr Vlasov abandoned with a stomach bug on Sunday.

Bad memories resurfaced for Welshman Thomas as he pulled out of the 2017 Giro injured five days after hitting the ground in a crash involving a race motorbike.