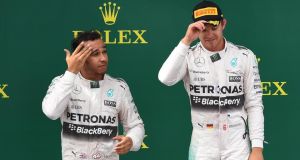 Lewis Hamilton and Nico Rosberg on the podium after the Austrian grand prix in Spielberg. Photograph: Joe Klamar/AFP/Getty Images

Nico Rosberg not only defeated Lewis Hamilton in the Austrian grand prix but also inflicted a level of damage on the world champion that was not so apparent in the German’s wins in Spain and Monaco. Rosberg was the stronger man, coming from behind to beat his Mercedes team-mate with something to spare.

Indeed, the German was better for most of the weekend, even in Saturday’s qualifying session when he was generally the more convincing despite Hamilton pipping him for pole.

This win has cut Hamilton’s lead to 10 points in the championship standings and, with the British grand prix at Silverstone coming up on July 5th, enlivens a narrative that had threatened to become slightly tedious.

Hamilton has been so dominant this season, at least on Saturdays, that he has won seven poles out of eight. But in terms of wins it is only 4-3 to him, with Sebastian Vettel taking the other race in Malaysia.

Taking his 11th victory, Rosberg was simply superior yesterday in Spielberg, beating Hamilton as he did last year; the latter will have to get his head around the challenges of the track built by the Red Bull team owner Dietrich Mateschitz.

Rosberg jumped Hamilton on the inside going into the first corner and then defended his advantage with ferocious determination. He said afterwards: “I had a good start and then good pace in the race – that is what I’m most happy about. I think I have found what I needed to find last year in terms of in the races and that’s what is really working out for me this year.”

A rather subdued Hamilton said: “I had a problem with the revs. I took my foot off the gas and the throttle was still on. It was not the best way to start the race but it is something we will work on to improve on my side of the garage.”

Before the pair came in for their solitary pit stop there was a five-lap period when Rosberg increased his lead from two seconds to four. Hamilton managed to reduce his disadvantage to 2.2sec but then, when the drivers pitted, Rosberg emerged the stronger once again. His stop was marginally the quicker (2.7 against 3.1) and the German built up his lead over the subsequent laps. When it emerged that Hamilton had crossed the white line at the pit exit, incurring a five-second penalty, Rosberg had in effect doubled his lead, from about five seconds to 10. But Rosberg would have won anyway. His only worry after that was some tyre vibrations in the closing stages.

Mercedes motorsport chief Toto Wolff believes Rosberg exhibited the mental toughness in victory that will keep the championship race alive to the end.

“Nico was faultless. We saw from today it’s going to go down to the wire. The races we have seen have been characterised by tiny mistakes by both of them, or the team, and today we have seen great race pace and faultless execution by Nico. It was a great performance,” he said.

The race got off to a dramatic start when there was a heavy collision between Fernando Alonso and Kimi Raikkonen. The Finn lost his rear end and Alonso, with nowhere to go, clattered into the back of him, putting both out of the race. They escaped injury.

It was an even more wretched weekend than usual for McLaren, with both of their cars out of the race by lap nine. Jenson Button, who like Alonso had been handed a 25-place grid penalty, was told to retire, and said: “When you have a 10sec stop-go penalty retiring on lap nine is never a bad thing.”

1 The Offload: Ireland are stuck in no man’s land
2 Nicky English: Galway and Waterford face battles with fatigue in All-Ireland semis
3 Ken Early: Roles have reversed for Guardiola and Mourinho
4 Every kind of wind imaginable was against Tipperary football - and they came through
5 Tipperary and Cavan deliver two earthquakes in one day
Real news has value SUBSCRIBE