NFL Superbowl 50: Broncos versus Panthers makes for a classic 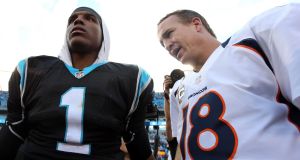 The Denver Broncos and Carolina Panthers are primed to provide a grand finish worthy of a landmark Super Bowl 50 on Sunday and cap a season of celebration by the National Football League.

An estimated 190 million Americans and a worldwide TV audience are set to tune in for a game that has the hallmarks of an instant classic as Carolina’s top-ranked offence clashes with Denver’s number one defence in a Silicon Valley showdown for the Vince Lombardi Trophy.

“Our defence has just been exceptional all season long,” praised Manning. “They have led the charge for us to be here from the get-go. Each game they had stepped up and done the job and they were awesome against Pittsburgh and against New England. They are the reason we’re here and, like I said a couple weeks ago, I’m just glad that I don’t have to play against them this year because they are that good.”

Still, the spotlight will not stray far from the two quarterbacks who bring contrasting styles and personalities to the championship game. Newton (26) is a flashy, brash imposing quarterbacking cyborg who can beat an opponent with his arm and his feet.

With a victory on Sunday the Panthers would find themselves with an 18-1 record, a Super Bowl and in the discussion about the greatest NFL teams of all-time.

Manning, meanwhile, is a cerebral 39-year-old quarterbacking genius with an off-the-charts football IQ who operates primarily from the pocket.

A Denver defence that led the NFL in sacks can expect a long evening trying to contain Newton while Manning will engage in an intriguing chess match with a Panthers defence spearheaded by All-Pro linebacker Luke Kuechly that led the league in takeaways.

“He (Newton) is a special talent, a rare talent,” said Broncos coach Gary Kubiak. “This league has the best of everything. I mean you look at some of the great throwers in this league with (New England Patriots) Tom (Brady) and (Green Bay Packers) Aaron (Rodgers) and those type of guys and then now you got a guy who’s got a combination of everything.

“Not only beating people with his arm but with his feet, his ability to move around. A tremendous athlete that they’ve molded their offense around.”

During the regular season, the Panthers were an offensive juggernaut averaging a league-high 31 points a game. In the playoffs, they have been even more explosive in piling up 80 points in two routs, including a 49-15 blowout of the Arizona Cardinals in the NFC Championship game that sent them through to their second Super Bowl.

This has been far from a vintage year for Manning, who missed six consecutive starts due to a heel injury and when he did return, for the first time in his Hall of Fame career he stood on the sidelines – as backup to Brock Osweiler.

But like every great drama there are twists and in the regular season finale Manning came on in relief of Osweiler to lead the Broncos to a win, then steered Denver to narrow playoff victories over the Pittsburgh Steelers and New England Patriots.

“I feel like I have a good understanding of the significance of playing in the 50th Super Bowl,” said Manning, who will be appearing in his fourth NFL title game.

“This is a unique and special opportunity and obviously we’re going to take advantage of it. There is no question it’s important to me, it’s very personal to me, and no question this season has had some unique challenges.”