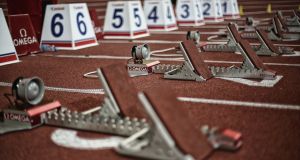 South county Dublin is in line to get a second running track after Dun Laoghaire-Rathdown county council agreed to endorse a seven-figure funding application for the construction of a new athletics facility at the Dundrum South Dublin AC clubhouse at Tibradden.

In agreement with the Dundrum Area Committee, the application for Government funding will be made through the new Large Scale Sport Infrastructure Fund (LSSIF), which is committed to making €100 million available for large scale sporting projects over the next 10 years.

Currently, the entire south county Dublin area is without a proper running track, the nearest being the inner city suburb facility at Irishtown.

The Government department is accepting LSSIF applications from National Governing Bodies, Local Authorities, Local Sports Partnerships and other sporting bodies up until April 17th, on top of the Sports Capital Programme, which provides funding at regional level, with maximum grants of €150,000 for local projects, and €300,000 for national/regional projects. An announcement on those 2018 applications is due later this month.

The council has committed to fast-tracking the Dundrum AC track application before the April deadline. “Dundrum South Dublin AC have worked diligently on this proposal and the decision to submit this LSSIF fund application shows that this work has paid off,” said John Kennedy, Fine Gael councillor for area. “Provided that the LSSIF funding request is approved, the project would be supported into the future by three different types of funding sources: from the Government, from the council and from the club itself in part.

“The advancement of this proposal represents a bright outcome for athletics in South Dublin and hopefully the decision to approve the funding request will in time lead to future Olympic success from local athletes as well as promoting fitness and exercise within the community into the future.”

Last month, a planning application notice was erected at the site of the new running track at UCD, one year after an anonymous €3 million donation was made to fund and maintain the facility over the next 20 years. The new site was put in place not long after the original track at the Belfield end was suddenly closed in November 2011, blamed on fears for “health and safety” when effectively it was simply worn and torn.

Once planning is approved, it is estimated there will be a 19-month build period, some of which may be weather-dependent, for completion by the summer of 2020, only for now the vast part of the south city and suburbs remains without a proper running track of any sort.

The LSSIF fund was created in order to provide the same level of access and transparency around projects where the minimum Government investment would be €300,000 up to a maximum of €30 million, on projects of up to €100 million. The objectives of the fund are aligned to those of the National Sports Policy, and include increasing active and social participation in sport.