A game of punts: lowest-scoring Super Bowl in NFL history fails to excite 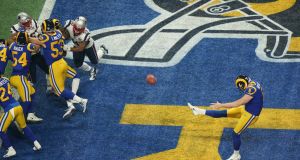 A dreary Super Bowl that featured a combined 13 punts ended with a sixth title for Tom Brady and the Patriots, who beat the Los Angeles Rams, 13-3. Photograph: Kevin D Liles/The New York Times

“It’s getting exciting now,” Jim Nantz of CBS said in mock excitement in the second half of the Super Bowl on Sunday night.

He was talking about a punt.

Los Angeles Rams punter Johnny Hekker’s 65-yard roller set the record for longest Super Bowl punt, and through three quarters, with a score of a 3-3, it truly was the most exciting play.

Nantz’s CBS broadcast partner, Tony Romo, the former Dallas Cowboys quarterback, had been the subject of much news coverage leading up to Sunday, mostly for his ability to predict plays and for the infectious enthusiasm he brings to his work.

But by the time of Hekker’s punt almost halfway through the third quarter, the game’s dullness seemed to have broken even him.

For the Rams, it was the eighth consecutive possession ending in a punt. As Hekker’s kick from the end zone tumbled to the Patriots’ 29-yard line, Nantz mused that it could set the record.

“Oh, you’ve been waiting for a stat like that,” Romo teased him.

“That’s it!” Nantz yelled. “That’s the highlight of the game.”

Hekker turned out to be the closest thing to a star the Rams could muster. A squad that finished the regular season as the second-highest-scoring team in football finished the Super Bowl without a touchdown, in a 13-3 loss to the New England Patriots.

The collapse of the offense was not missed by the players who participated in the losing effort.

“Last time I checked, defense wins championships,” C J Anderson, the Rams’ backup running back, said after a game in which his team managed just 57 total yards in the first half. “That saying has been in football for a long time.”

The game, the lowest-scoring Super Bowl in NFL history, was hardly one to remember for the Patriots offense, which plodded along to 407 yards and just one touchdown, but it offered no shortage of ways to sum up the Rams’ offensive ineptitude.

Todd Gurley, who led the NFL with 21 total touchdowns this season, ran for just 35 yards on 10 carries and caught one pass for minus-1 yard. His plus-size backup, Anderson, ran for 22 yards on seven carries. Anderson credited the Patriots’ gap control with stopping both him and Gurley. “Obviously neither of us got going,” Anderson said, “so you’ve got to give it to New England on that.”

Partly as a result of that stymied running game, Jared Goff, the team’s superstar third-year quarterback, spent the entire game running for his life. He may have been sacked just four times, but he was hit by a Patriots defender on 12 other plays. The constant pressure resulted in nearly all of his throws being rushed.

It was the first time since Coach Sean McVay took over the team that the Rams were shut out in a first half, and it was just the second time in 36 games (including the playoffs) that they were held without a touchdown.

Los Angeles never ran a play in the red zone. The team’s best effort got it to New England’s 27-yard line before Goff threw an interception that essentially handed the win to the Patriots.

The Rams converted just three of 13 third-down plays. They were held below 300 total yards for just the second time this season. They were penalised for 65 yards and rushed for just 62.

In all, that collection of offensive atrocities led to Hekker’s punting the ball nine times for 417 yards, only the third most in Super Bowl history, according to Pro-Football-Reference.com. Baltimore’s Kyle Richardson set the record with 430 in the Baltimore Ravens’ win over the Giants in Super Bowl XXXV. That game resulted in a whopping 852 combined punting yards, making this game’s 632 combined yards seem pedestrian.

Hekker’s effort gave Nantz a record to tout, and it gave the punter’s family something to watch. But for the Rams, who came into the week as the leaders of the NFL’s offensive revolution, the game offered little beyond disappointment.