Jamal Murray to the fore as Nuggets hold off Lakers comeback 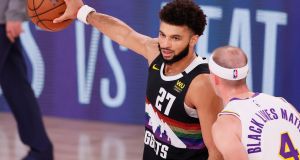 Jamal Murray came close to a triple-double in lifting the Denver Nuggets to a thrilling 114-106 win to reduce the Los Angeles Lakers’ NBA Western Conference final series lead to 2-1 on Tuesday night.

Murray had 28 points, 12 assists and eight rebounds, and made two crucial late three-pointers to snuff out a Lakers rally which threatened to make the scoreline in the seven-game series an almost-unassailable 3-0.

The match was evenly poised through the first quarter before the Nuggets broke away to lead 63-53 at half-time. A strong third quarter put them up 93-75 at the last break, before the Lakers almost snatched a win with a strong finish, outscoring Denver 31-21 and including a 19-2 run.

Denver’s lead was down to just four points before Murray made a three-pointer with two minutes left. His follow-up effort from distance made it a comfortable 111-99 with 53 seconds remaining.

The Nuggets already have a record this post-season of erasing two 3-1 deficits to progress, but no NBA team has come back from 3-0 down to win a series.

Lebron James led the Lakers with a triple-double, which included 30 points, 10 rebounds and 11 assists, while Anthony Davis had 27 points. Denver will seek to level the series on Thursday.

1 Seán O’Brien: Anger over my parents’ break-up never left me
2 Ireland get the job done against Italy to keep alive Six Nations hopes
3 Weekend GAA: Throw-in times, team news, TV details
4 Hugo Keenan and Will Connors: The best of friends, the best of debuts
5 France warm up for Ireland with impressive win over Wales
Real news has value SUBSCRIBE