Nadal departs Wimbledon in first round 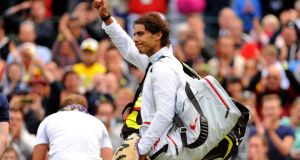 Spain’s Rafael Nadal waves to the crowd after losing to Belgium’s Steve Darcis on day one of the Wimbledon Championships. Photograph: Dominic Lipinski/PA

His best results in 2013 have come on the Challenger circuit. He is ranked 135 in the world. He’d won just once at Wimbledon before. Yesterday he brought down Rafa Nadal and Centre Court rose to celebrate what they love best, a rank underdog, a player daring to absurdly over-reach.

The player who sent the tremor through the draw, Steve Darcis, had the look of a man that had just emerged from his bunker to find the entire town had disappeared in the passing hurricane. And as people halted to revise their views on what many saw as the out of date, All England Club committee, who eccentrically seeded Nadal five, a wide eyed Darcis came off court something of a local hero.

The upside is the winning Andy Murray has one less former champion to consider if he dares to make himself a challenger, with Roger Federer, in Murray’s half of the draw, also coming through yesterday in straight sets.

On a day of the gods Nadal normally turns Centre Court into a coliseum, where Federer makes it his cathedral. Nadal brings war and certain pain, Federer sleight of hand and artistry. But yesterday the Spaniard fell far short of the bombastic warrior and what brought him down much more than Darcis did, what sapped his spirit, was his own fallible game.

Loose shots scattered the ball everywhere, wide and long. The accurate whipped forehand; the heavy spin that usually steeples into opponent’s underarms; the tricky left hand and his muscular brand of play and movement that few can match vanished.

The winner at Roland Garros a few weeks ago for his 12th Grand Slam, joint third on the list of all time Slam winners with Roy Emerson behind Federer (17) and Pete Sampras (14), Nadal didn’t warm up with a grass tournament for the first time since his Wimbledon debut in 2003.

Instead he spent time at home in Mallorca recovering, rather than playing the grass tournament at Halle. Declining to use physical reasons for the defeat, although he seemed troubled by his knee in the final set, the Spaniard sought no refuge in excuses.

‘Fantastic match’
“I think you are joking,” he said when asked about his knee. “I answered this question three times or four times already. I don’t gonna talk about my knee this afternoon. The only thing I can say is congratulate Steve Darcis. He played a fantastic match.

“Everything that I will say about my knee today is an excuse and I don’t like to put any excuse when I lose a match. He deserves not one excuse.”

Two tiebreaks 7-6 (4), 7-6(8) that fell to Belgian lurched the match in his direction. But even at 2-0 down few thought it was finished. In the second set, particularly, Nadal had a chance for parity when it went into the tiebreak.

Coming from 6-3 down there was a glimmer of hope when he earned a set point at 8-7 on the Darcis serve. Rather than drive his advantage home Nadal quickly surrendered the points back, an out of character loose, long forehand handing Darcis the second set.

As Darcis squeezed another tube of high energy paste into his mouth during the changeover, one of his choices at the end of the third set was to freeze and choke to the master.

He had claimed his one service break. All he needed was to hang in and serve for the match.

A scrambling low scoop for 30-15 brought the crowd to their feet. Much as Nadal is a Centre Court favourite, they could see the greater glory of Murray’s path clearing and roundly cheered as the match reached the point of inevitability and the Spaniard began to sink.

Another loose forehand that sailed over the white line left Darcis at match point. Nerveless, he took it coldly, an ace shooting down the inside to which Nadal barely moved at all. Did you surprise yourself Darcis was asked.

“Yes, I did. Just the second guy in the top 10 I’ve beat. I’m really, really happy today. Rafa fights to the last point. I knew it would be very, very difficult,” he said.

‘A lot of slice’
“Today I served very good. I could use a lot of slice and I don’t think he liked it very much. Of course he didn’t play very good. It was his first match on grass. I played four (on grass). Physically, he looked okay. He was moving. He was running good. I have no idea if he was a little bit injured. You have to ask him.

“Nobody was expecting me to win. I had to relax, enjoy the game and that’s what I did. I knew I would have a chance if I played a good match. Of course Rafa didn’t play his best tennis. I could see it and I tried to take advantage.

“You play tennis to play on big courts against big players,” added the 29-year-old. “In a few years people will talk about this match and also maybe me. I enjoyed it from the first point to the end. It was a great, great moment.”