Monkstown pick good time to get show back on road 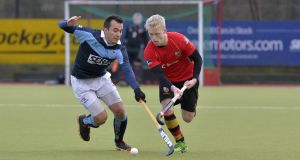 While Dublin’s Monkstown got their National League show back on the road thanks to a 3-0 win over Pembroke last weekend, Lisnagarvey stretched their lead at the top of the EY Hockey League.

It was good timing for Monkstown, who had been losing matches provincially and in the league that they would have expected to win.

But at second place in the table they are still well placed although now seven points behind leaders Lisnagarvey, who stuck four goals past Banbridge last week.

The Ulster leaders have a harder task this Saturday in Grange Road and face a Three Rock Rovers team, who are back in the top four after a deflection from Harry Morris put Railway to the sword last time out.

But ’Garvey will probably size up Rovers in fourth place in the knowledge that they beat third placed Banbridge so comfortably and may well feel confident in their short trip to Dublin. They did after all travel to Rathdown a few weeks ago and also beat Monkstown 1-0.

Banbridge will naturally want to rebound from the drubbing by ’Garvey and entertaining Monkstown in Havelock Park provides just the setting. As the top-four teams are all playing another team in the top four, the weekend could indicate who might be the favourites heading towards the latter stages and playoffs.

At the moment that’s looking like Lisnagarvey unless Rovers can call a halt to their mid-season charge.

On another front the application date for a new chief executive for Hockey Ireland closed off on January 31st with a candidate expected to be announced in the coming weeks. The view is the earlier the better the vacancy is filled given that it’s an historic Olympic year.

1 David Clifford sends everyone back to their corners unbeaten
2 Six Nations: A 21st-century tournament that saw Irish rugby come of age
3 Six Nations: Ireland are contenders but England still the team to beat
4 Limerick roar from behind to sink Tipp and start league in style
5 James Durcan steals a draw for Mayo in Ballybofey
Real news has value SUBSCRIBE