Mixed day for Irish but with no bitter taste 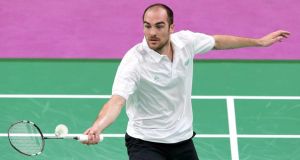 First European Games or not, it wasn’t supposed to end like this, if not for Sean McComb, then definitely not for Scott Evans.

Because while McComb leaves Baku with a European Games bronze medal – some proper consolation for the nasty cut received over this right eye in his lightweight semi-final loss to Albert Selimov from Azerbaijan – Evans is going home with no consolation whatsoever.

As the number one seed in the men’s badminton singles, Evans made no secret of his desire to win the gold medal, and everything appeared to be going exactly to plan until he came up against Denmark’s Emil Holst in his quarter-final.

Evans struggled to find his form in the first game, losing 21-17, and then found himself chasing Holst in the second game too, losing that 21-14.

Although it’s not the first time the seeding has gone wrong, and even though Holst is ranked 52nd in the world, and Evans ranked 26th, it always comes down to the player that shows up on the day.

Evans admits he didn’t show up with his A-game, possibly allowing some of his own expectation get to him.

“Yeah, obviously there was lot of pressure,” said Evans. “It’s taken its toll on me, physically and mentally. I have to deal with the pressure and I’ve found that very, very hard.

“The difficulty of playing badminton in a small country with lots of sports competing for funding. These are the tournaments where if you do well you can get more funding, and that was part of the pressure.”

Although Holst still proved more than a worthy winner: “World ranking doesn’t really mean anything,” added Evans. “He should have been seeded second. I don’t go into a game thinking I’m ranked 20 places above the other player. He’s obviously the best player left in the tournament now.”

Although not many competitors in Baku have worked harder for their bronze medal than McComb, the lanky lightweight from Belfast who was outfought by Selimov, but in no way out-classed, and the 22-year-old is already eying up a place in the Rio Olympics.

“I’ve nothing to be ashamed of,” said McComb, the nasty cut caused by clash of heads in the first round. “He (Selimov) is a former World and European champion, currently ranked number one in the WSB and he’s qualified for Rio. So I learned a lot in there today, I’ll learn more from losing than I would if I had won.

“It’s another step on for me. I’m learning year on year and every time I come out to a competition like this it’s a great experience. The coaches only ask us for 100 per cent and that’s all I done was give 100 per cent.”

Like the other younger members of the Irish boxing team in Baku, McComb has also announced his arrival at these European Games – and the experience of it, in every sense, has proved more than worthwhile.

“I personally think that the next European Games will be a qualifier for the Olympics, because this competition can only grow. It’s a year before the Olympics, and I’d say in 2019, you will see a lot more top names in it. It’s only going to be good for boxing.

“For me, next, there’s a European Championships in August and World championship after that, before the end of the year. I haven’t quite qualified yet, it depends on the result of the final. But this gives me the goal to go and change the colour, in any opportunity I get from now on in.

“And it’s all down the support back at home, family members and father, and all the people who have given me funding, it’s just been great. My club coach Mikey Hawkins and Peter Brady and then the national coaches Billy Walsh and Zaur Antia and I’m just really thankful for it and I’d dedicate the medal to everyone who has shown me support.”

So, with just one more day in the ring to come the Irish boxers have already won as many medals as the London Olympics (four). The only question now is what colour the last two will be, as Katie Taylor and Michael O’Reilly try to add two golds to the bronze won by McComb and the silver won by Brendan Irvine.