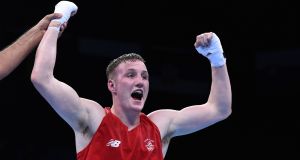 Irish middleweight boxer Michael O’Reilly in action in Baku in 2015. An investigation into O’Reilly’s failed doping test at the Rio Games may not be completed for months. File photograph: Tobias Schwarz/AFP/Getty Images

An investigation into the failed doping test by Irish middleweight boxer Michael O’Reilly at the Rio Games may not be completed for months, according to Dr Una May, the head of anti-doping at Sport Ireland.

In August, O’Reilly became the first Irish athlete to be sent home from the Olympics for failing a doping test.

Speaking about the case on RTÉ Radio One’s Drivetime show, Dr May said: “Any anti-doping case can be a long process and an athlete is entitled to submit a full explanation as to the circumstances behind their case.

“The processing of that can involve any number of investigations; scientific, expert witnesses, further analysis of different types. There is a lot of potential issues that can arise in processing a case.”

Michael O’Reilly (23), from Portlaoise Boxing Club, was a medal favourite in his division, having won European Olympic gold in Baku last summer.

He now faces a potential ban of up to four years, even if he proves the supplement he consumed was unintentionally contaminated.

“What I can say is the case is under way and we are working away on it. I can’t give a guideline on the timeframe because that is not something that’s a clear-cut thing. There is no set timeframe,” she said.

“We will process it as quickly as is appropriate but we will make sure full attention to detail is given at all stages of the process. It would be normal in anti-doping cases to be talking months.”

Mr O’Reilly admitted that prior to the Rio test he was given a supplement “by someone unrelated to his team or association” which may have contained a banned substance.

He dropped the appeal lodged against his provisional suspension after failing the test and flew home from Rio before the Games started.