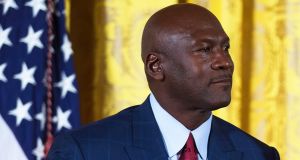 Michael Jordan condemned ‘ingrained racism’ in the United States in a statement on the death of George Floyd released on Sunday. Photo: Shawn Thew/EPA

Michael Jordan has released a statement on the death of George Floyd, condemning “ingrained racism” in the United States.

“I am deeply saddened, truly pained and plain angry,” wrote Jordan in a statement posted by the Charlotte Hornets, the NBA team he owns. “I stand with those who are calling out the ingrained racism and violence toward people of color in our country. We have had enough.”

Jordan has often been criticised for his reluctance to speak up on political matters, especially when compared to the activism of other NBA stars such as LeBron James and Kareem Abdul-Jabbar. During a 1990 Senate race in his home state of North Carolina, Jordan refused to endorse Democrat Harvey Gantt, an African American who was running against the incumbent Republican Jesse Helms, a notorious racist.

Jordan, who at the time had already won the first of his five NBA MVP awards, explained away his refusal to take a stance by saying: “Republicans buy sneakers, too.”

Jordan has since insisted the comment was made in jest.

The six-time NBA champion, widely considered the greatest basketball player of all time, said on Sunday that Americans needed to work together to find answers to the country’s problems.

“I don’t have answers, but our collective voices show strength and the inability to be divided by others. We must listen to each other, show compassion and empathy and never turn out backs on senseless brutality,” he wrote.

Curfews were in place in more than a dozen US cities on Sunday and Jordan urged people to protest peacefully. “We need to continue peaceful expressions against injustice and demand accountability,” he wrote.

Jordan finished his statement by expressing his sympathy to the family of Floyd and others. “My heart goes out to the family of George Floyd and to the countless others whose lives have been brutally and senselessly taken through acts of racism and injustice,” he wrote.

The former Chicago Bulls star has been in the news lately due to the popularity of The Last Dance, a documentary telling the story of his final championship season. – Guardian