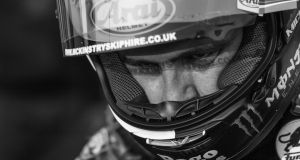 Michael Dunlop: “Once you’re on the bike you’ve got freedom. It’s only you. Off the bike lots of people are picking and poking at you. I’m free on the bike.”. Photo: Linden Adams/Getty Images

“I’m the one putting my life on the line so it has to happen the way I want it to happen,” Michael Dunlop says bluntly on the Isle of Man while preparing for this year’s thrilling yet dangerous series of TT road races. Dunlop lays down the law in regard to this rare interview and all other personal interaction because since last Saturday, and during six days of deadly racing, he will reach speeds in excess of 200mph as he pushes his motorbike to the limit on ordinary roads and mountain passes that have taken the lives of 257 riders over the years.

Dunlop is one of the most intriguing yet prickliest men in sport. He has won 15 TT races and will surely go on to break the record held by his uncle Joey, the greatest road racer in history, who won 26 times on the Isle of Man before being killed on his bike in 2000. Dunlop also lost his father, Robert, Joey’s brother, at the North West 200 in their native Northern Ireland in 2008. Since we did this interview, Dan Kneen, who rode alongside Dunlop for Tyco BMW, died on Wednesday evening in practice for the TT. On Monday the number of deaths in this year’s race rose to two when Adam Lyon crashed during the Supersport 1 Race.

Stressing that he is “as fired up as I’ve ever been”, the 29-year-old does not dismiss a question as to whether he may shatter another TT record by winning six races at this year’s meeting. “Anything is possible,” he says. “But I’ll have to ride my bike as hard as I can. If that’s good enough to win, then great. If it’s not, that’s the way life is. These are long races and a lot goes on. We’ll take each one as it comes and see where we end up.”

I have learned that with Dunlop it is wise to approach each encounter with few expectations that his brusque manner will soften and open a few chinks in the wall he has built around himself. We met for the first time last month, in the Triangle, as the North West 200 course is known, linking Portstewart, Coleraine and Portrush.

Ten years and one day had passed since his dad died on those very roads and Dunlop said a wary hello. It had been made clear he was not giving any interviews and I did not press him. Instead we spoke briefly about his 2017 book, Road Racer, which provides a compelling account of his dad’s death.

On May 15th 2008 Robert and his two sons, William and Michael, were practising at the North West when the red flags came out. Eventually Michael saw “a man lying next to what’s left of his bike. That’s when it hits me. The man lying next to the broken bike is my dad”.

Two days later, and defying the race stewards who declared that neither he nor his brother were fit to race, Michael got back on his bike. He wanted to honour his father by racing. The stewards were made to back down by a 19-year-old.

Now, on the Isle of Man, Dunlop remembers how he only felt peace when snapping down his visor. Above the roaring engines, a sound that defined his father’s life, Dunlop heard silence. He looks at me for the first time since our interview began 15 minutes earlier: “Once you’re on the bike you’ve got freedom. It’s only you. Off the bike lots of people are picking and poking at you. I’m free on the bike.”

In 2008 the teenage Dunlop raced wheel-to-wheel against Christian Elkin and the great John McGuinness. It was a dramatic race with, as Dunlop suggests in his book, “no love given, no love lost … I’m going so fast I don’t know if I can stop”.

Dunlop won and the crowd erupted – in memory of Robert and in amazement at the grit of his son. For Dunlop: “My head’s full of tears. I’ve won the race but I can’t find any happiness in it. Tomorrow, I bury my father.”

He has done so much since then. When Dunlop won the Senior TT last year he moved up to fourth among the all-time winners while strengthening his reputation as the world’s best road racer and the sport’s most difficult man. He loathes interviews and the only person able to persuade him to talk to me is Paul Phillips, who runs the TT, the race meeting that means most to Dunlop.

Our conversation is stilted until I ask if his enjoyment of racing has diminished. “I like the winning. It’s just this crap [Dunlop points at my recorder]. I don’t like doing this. I ride a motorbike to race. You write stories to sell newspapers. But the newspapers don’t sponsor me. I’m doing this for free when I could be working on my bikes.

“People say you need newspapers to create sponsorship. But the newspapers only want to speak to you when you’re winning. I don’t do much press now because I don’t like the bullshit.”

Dunlop’s stark honesty is bracing. I hope I am not “pushing and poking” him too hard? He shrugs. “Everybody does – in one way or the other.”

He only really begins to engage when I mention the 2015 TT. Two days before he was due to race his Yamaha he swapped it for a BMW. It is as bizarre as Lewis Hamilton stepping away from his Mercedes before a race and climbing inside a Ferrari. Surely this caused huge flak? “I don’t believe in flak. I don’t do flak. I do my own thing and if people don’t like it that’s their problem. I’m not a monkey at a circus. I’m not here to entertain anyone. I’m just here to win.”

It still seems incredible he could hop on to a rival bike despite contracts and lawyers. “There’s a real story there,” he concedes. “But we’ll save that for another book. It’s not about who wears the right T-shirt or who shocked who. It’s about winning.”

He is on a variety of bikes at this year’s TT, refusing to be tied to one manufacturer while running his own team, Michael Dunlop Racing. Apart from showing his voracious ambition it underlines Dunlop’s intelligence, despite his limited education, in securing the best bikes. “It’s not about the best bikes,” he insists. “All the manufacturers’ bikes are pretty equal. It’s about finding the best people I can do business with.”

Dunlop acknowledges the gravity of road racing in his book: “Death is responsible for the man I am today – my dad going, my winning that race the day before his funeral, continuing the Dunlop ‘dynasty’ … I’d give it all up tomorrow to have him back just for a day.”

He winces. “It was a stupid thing to say because anybody who lost their father would feel that. It’s the same for any normal human being.”

His uncle Joey is feted justifiably but Dunlop believes his father was often as good on the bike and sometimes even better. “Oh yeah. He obviously had a shorter career but he was real good. He had two life-changing injuries so he had to keep motivating himself to get better. He was such a strong person and one of the toughest men who ever rode.”

Robert Dunlop crashed so badly during practice for the TT in May 1994 that he spent six months in hospital and was bed-ridden for a year. His son, however, says: “I don’t take fear into consideration. Fear stays with you for ever. So I don’t do fear. Yeah, I’ve been scared on a bike but you don’t dwell on it. The important thing is to keep pushing.”

When last did he feel scared on his bike? “Not so long ago … but long enough not to remember it.”

His closest rival, Ian Hutchinson, one ahead of Dunlop on the all-time list and winner of a record five TT victories in a week, suffered another horrendous crash in the Senior race last year. Hutchinson could not walk for 11 months but he returned to racing two weeks ago at the North West. He shuffled over on a stick and gave me a gripping interview.

Does he really dislike Hutchinson? “That’s not the point. I just race motorbikes.”

Dunlop is more relaxed when he tells me about the veterinary practice he part-owns in Dublin. “The lady that runs it is fantastic. I try to go as often as I can but I let her get on with it. She doesn’t need me asking stupid questions. For me it wasn’t just a business decision. It was also wanting to do something different.”

It is a shame that a racer as gifted as Dunlop cannot enjoy his success more in public. He often seems suspicious and contemptuous. Is that a true reflection of how he feels? “I’ve met good people in this game, 90 per cent are really good. But the other 10 per cent ruin it for the 90 per cent. I’m happy working hard with those good people, like my mechanics. I push them to the maximum because I want to get the best out of it.

“It’s not because I’m a wanker. I live alone so I’m fortunate I’m my own free man. My mum’s always very good. She never asks any questions. She’s had her troubles, like everyone, but she keeps going and pushing – like I do.”

I can sense how hard Dunlop will push himself and his bike at the TT and so I thank him for giving me half an hour. He stretches out his hand and says: “No problem.”

Outside, lines of people try to glimpse Dunlop inside his motorhome. He may turn out to be the mightiest Dunlop of them all but he looks lost to the world. Dunlop is hunched over a bike, talking to a mechanic, absorbed in his work. He almost looks happy. – Guardian service