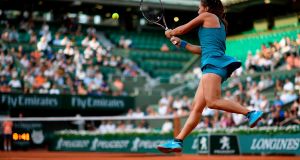 But second seed Caroline Wozniacki is in danger of being knocked out in the fourth round.

She said: “A personal milestone for myself was getting to the quarters, obviously doing well here fourth round a lot of the years in a row. So I think that was something big for me, which is great.

“But hopefully it doesn’t end here. You’ve got to keep going. I would like to keep going. When I came into the tournament, I wasn’t thinking ‘oh, make quarter-finals’. I was just thinking day to day, like, let’s try to figure it out.

“I have figured it out pretty well the last couple matches so I’m going to keep doing that.”

Stephens will meet the winner of the clash between Wozniacki and 21-year-old Russian Daria Kasatkina.

is looking for back-to-back grand slams after breaking her duck at the Australian Open in January.

But she has her work cut out to make it to the last eight having dropped the first set against Kasatkina, a former junior champion at Roland Garros.

Wozniacki had lost just four games in her previous two matches but Kasatkina took the early initiative with a break in the third game.

The Dane hit back twice, only for the youngster to break her once again and force a tie-break.

Wozniacki flung her racket to the ground after giving away a set point and then punched a forehand out to compound her anger.

She began complaining about the light after the first set, and at 3-3 in the second the match referee relented and let the players leave the court.

Keys secured her first appearance in the last eight after dispatching Romania’s Mihaela Buzarnescu 6-1 6-4 in an hour and five minutes.

She will meet Yulia Putintseva of Kazakhstan, who pulled off a surprise by knocking out Czech 26th seed Barbora Strycova 6-4 .