Jonty Evans in intensive care after fall at Tattersalls trials 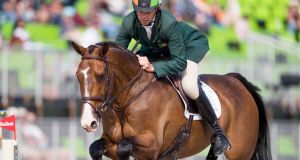 Jonty Evans was injured in a fall at the international horse trials on Sunday. Photograph: Morgan Treacy/Inpho

Event organisers Tattersalls Ireland issued a short statement on Monday morning regarding rider Jonty Evans who was injured in a fall at the international horse trials on Sunday.

“Following further evaluation at Beaumont Hospital, Jonty Evans is in the Neuro Intensive Care Unit and his condition is being monitored and treated.”

The incident occurred at the second element of the water complex (fence 19) during the cross-country phase of the George Mernagh Memorial CCI3* competition at the Co Meath venue. The Gloucestershire-based Irish international, who had been lying second with Cooley Rorkes Drift, was first removed to Connolly Hospital, Blanchardstown for initial evaluation and from there was transferred to Beaumont for further treatment.

Australia’s Emma McNab, who led overnight, took the honours on a penalty score of 27.10 with the Irish Sport Horse Fernhill Tabasco, a 10-year-old Tabasco van Erpekom gelding which was bred in Co Kilkenny by John Nulty. New Zealander Jonelle Price, who won Badminton this year, moved up from sixth to second with Faerie Dianimo (28.30). Australia’s Bill Levett and the ISH gelding Lassban Diamond Lift finished third (31.60) just ahead of Co Carlow’s Sam Watson and Imperial Sky (31.90), another ISH gelding.

The other three classes which concluded on Sunday also went for export with Britain’s Izzy Taylor landing The Irish Field CCI3* class for the second time in four years.

The 34-year-old mother of two, who is based near Bicester in Oxfordshire, was lying second going into Sunday’s concluding show jumping phase and completed on her dressage score of 28.50 with the 11-year-old mare Call Me Maggie May. She was left in front when last to go, Sweden’s Ludwig Svennerstal, had an expensive pole down with El Kazir SP and finished third (29.50).

Like the winner, Tattersalls favourite William Fox-Pitt also completed on 28.50 with Little Fire, winner of the young horse class here in 2016, but had to settle for the runner-up spot as he had picked up 0.80 of a time penalty across the country on Saturday. Best of the Irish in seventh was again Watson who here rode the nine-year-old ISH gelding Tullabeg Flamenco (33.30), a dun by Tullabeg Fusion.

British comedian Jennifer Saunders stood on top of the podium with rider Piggy French following the success of her ISH Cooley Monsoon in the Eventing Ireland CCI2* class. By the in-form sire Ramiro B, the 10-year-old gelding was bred in Co Wicklow by Thomas Byrne out of the Krakatan mare Declans Folly. On board Court Casper, Britain’s Tom Jackson claimed the honours in the Connolly’s Red Mills CCI2* for riders under 25 having led from the dressage phase.

Irish show jumpers’ excellent run of victories continued late on Sunday when they won the five-star Longines FEI Nations’ Cup of Canada at a rain-soaked Thunderbird Show Park in Langley, just outside Vancouver.

This was a second Nations’ Cup victory for Ireland over the weekend, following that in Portugal on Friday night, and the team’s domination of the five-country event was so great that anchorman, Conor Swail, didn’t have to jump in the second round.

Kilkenny’s Richie Moloney got Ireland off to the perfect start in the opening round when jumping clear with Equinimity LLC’s Carrabis Z. Captain Brian Cournane on Robert Stiller’s Dino and Co Down’s Conor Swail with Rose Hill Farm’s Rubens LS La Silla both jumped clear but picked up a time fault apiece.

This meant the team could discard the uncharacteristic 12 faults picked up by Daniel Coyle with Cita (winners of Friday’s Grand Prix)leaving Ireland well in front at the halfway stage on just two time faults with Canada lying second on 13 and Mexico third on 20.

In round two, Moloney completed a double clear on Carrabis Z before Cournane and Dino came home with nine faults. Coyle and the Ariel Grange-owned Cita returned to deliver an excellent clear jumping round, adding just a time fault second time out, meaning Swail didn’t need to jump as Ireland couldn’t be beaten.

Chef d’equipe Michael Blake said he was particularly pleased with Sunday’s victory. “We targeted this event a year ago and put the team together early. All four riders managed to go one-time clear and Richie was brilliant - I’m so proud of him, he rode out of his skin. Daniel’s first round didn’t go to plan but he came back and did a great job, making a success out of potential disaster. That’s what Nations Cups are all about!”

Asked about the recipe for the Irish team’s recent successes, Blake replied: “Like a lot of countries, we had started to rely on the old guard too much. When I got the job I decided the best thing we could do was develop as many riders as we could and give them Nations’ Cup experience. So last year 29 riders jumped on 20 different teams and we had 17 podium finishes out of 20. Obviously winning the European Championship was a big thing for us.

“This year, as of today, 25 riders have jumped on a Nations’ Cup team - we also had a win in Lisbon this weekend and for us to have two winning teams in the same weekend, that showed some depth!”

Waterford native Anthony Condon, who was a member of the Nations’ Cup-winning team in Lisbon, finished second in Sunday’s 1.60m Grand Prix in the Portuguese capital.

Again riding the 12-year-old SFS Aristio, which he owns in partnership with John Hales, Britain-based Condon was one of five riders from a starting line-up of 57 to advance to the second round. Four of these recorded double clears with Condon’s time of 40.76 being bettered only by that of the host nation’s Luis Sabino Goncalves riding Unesco du Rouet (40.30). Portugal’s Duarte Seabra finished third with the Irish Sport Horse gelding Fernhill Curra Quinn (41.15) which is owned by Kilkenny-base Carol Gee.