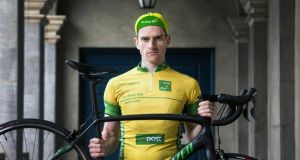 Having made his return to pro cycling post-retirement earlier this year, Martyn Irvine has decided to once more put an end to his competitive career. The former world scratch race champion had felt he had unfinished business with the sport, returning with the new Irish Aqua Blue Sport team, but injury led him to reassess and to move into a management role with the squad.

“I want to thank Aqua Blue Sport and especially Rick Delaney for this great opportunity,” he said on Tuesday. “I decided to return to racing this year but when I broke a bone in my hip again this year I knew I had to take a serious look at where I wanted to go next.”

Irvine previously suffered a fractured femoral head in 2013, weeks after winning his world title. His crash last May in the Baloise Belgium Tour caused a hairline fracture to his right hip. While he returned to compete in the Prudential RideLondon-Surrey Classic and the Arctic Race of Norway, he hasn’t raced with the team since August.

“I have had a lot of injuries and there comes a point where the body just says no more. I have reached that point. I discussed this with Rick [Delaney, Aqua Blue Sport team owner] and he offered me the Sport Director role,” he said. “It is the perfect fit for me and the right decision. It is a huge challenge and I have a huge amount to learn but I am really looking forward to 2018.”

The County Down rider is 32-years-old and aims to use the experience he has gained on the road and the track to help guide others.

Aqua Blue Sport General Manager Stephen Moore described the signing as a great move for the team. “It is always sad to see a great rider retire from competition but Martyn still has a huge amount to give to the sport,” he said. “With his enthusiasm and sharp intelligence he will be a huge help to our riders. It will be great to see him in the team car in 2018.”