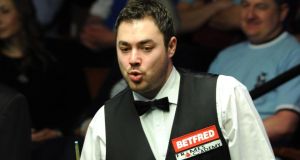 Kurt Maflin reacts during his match against Mark Selby during the Betfred World Championships at the Crucible Theatre, Sheffield. Photo: Tim Goode/PA Wire

The survival instincts of Mark Selby rescued the defending world champion and left Kurt Maflin heartbroken as the Crucible witnessed an opening-day classic.

It seemed the theatre’s famous ‘curse’ was set to strike again when Selby lost five successive frames from 8-4 in front, to be one away from a shock first-round defeat.

Never before has a first-time champion returned to Sheffield and successfully defended the title, with Selby coming terrifyingly close to being the 16th to crash and burn on that mission. Instead he faced up to the adversity and snatched the next two frames to earn a 10-9 victory, setting up a shot at Anthony McGill or Stephen Maguire in the second round.

McGill held a 6-3 overnight lead in that all-Glasgow battle.

Whether cursed, careless or caught out by the craft of Maflin, Selby’s snooker legs gave way on Saturday evening, until they belatedly propped him up at the death.

Four defending first-time champions have tumbled out in the first round since the tournament moved to its South Yorkshire home in 1977: Steve Davis, Dennis Taylor, Graeme Dott and Neil Robertson.

Selby looked like having his name added to that list when Maflin was at the table early in the 18th frame, but he failed to make the best of his opportunity, and of another that arrived early in the decider when the underdog missed a red that will haunt him.

Maflin, born in Lewisham but resident in Oslo for the last decade and now a Norwegian citizen, grew up competing with Selby in snooker’s junior ranks but the paths of their careers diverged in the professional game.

While Selby made his World Championship debut 10 years ago, Maflin is new to the Sheffield scene. This was his debut.

World number one Selby curiously went off the boil just when he was looking close to the form that saw him beat Ronnie O’Sullivan in last year’s final. He produced a total clearance of 124 to pull four frames clear, with victory beckoning.

Rather than complete the job there, Selby faltered and 38th-ranked Maflin surged close, then level, and then unbelievably ahead.

Selby gave away 30 points in fouls after repeatedly failing to escape from a snooker in the 14th frame. With three reds on the table, Selby looked to flick off the ball furthest up the table, close to the pink, but found the two-cushion attempt particularly problematic.

He gave away so many points that it reached the point where he found himself needing snookers, and if Maflin did not have Selby rattled before then, he surely did at that moment.

On qualifying, beating Fergal O’Brien 10-9 late at the nearby Ponds Forge leisure centre on Wednesday night, Maflin was mentally exhausted and said he wanted to avoid playing on day one of the tournament. But he also stated the prospect of facing Selby, or Ronnie O’Sullivan, would not worry him, saying: “If my game is as good as it can be I think that’ll be enough to get through.”

That was bold talk, but Maflin backed it up on the table.