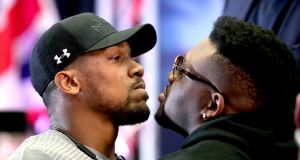 Matchroom is pursuing a new opponent for Anthony Joshua’s IBF, WBA and WBO heavyweight title defence on June 1st after Jarrell Miller was denied a licence over an “adverse finding” in a drug-testing sample.

The Voluntary Anti-Doping Association (VADA) had informed both camps of the results that came from a test on March 20th, in which there was an adverse finding for GW1516, a metabolic modulator also known as cardarine and endurobol.

Miller retains the right to request a further sample and to reapply for a licence for the fight at Madison Square Garden, when Joshua makes his debut in the United States.

Should the outcome again be the same, Miller will officially be ruled out, so Joshua’s promoters are already pursuing alternatives to prepare for that eventuality.

Matchroom had long planned to build his profile in the US boxing market, to the extent that the fight location — which they remain committed to — and Brooklyn’s Miller had been selected specifically to maximise its appeal.

The importance of furthering Joshua’s reputation therefore means they remain determined to honour the June 1st fight at the same venue instead of considering a postponement or change of location.

Matchroom’s chief executive Frank Smith said: “We’re working with the various teams to try and come up with a solution.

“The plan is for Anthony Joshua to carry on training for June 1st at Madison Square Garden. It’s very likely he fights here on the first of June.

“We found out late last night so aren’t going to comment on him but we’re looking at other potential opponents and we’ll share details when we know more.

“There are a lot of discussions going on and we’ve got just under seven weeks to find suitable replacements. The plan is for ‘AJ’ to focus on fighting June 1st at MSG.

“It’s very important that he carries on with his US debut. It’s been a long time coming, we’ve already sold 15,000 tickets for the event; have a huge travelling support.

“For us to give him that entry into the US market, especially building on (streaming service) DAZN’s upcoming fights, is very important for us and that schedule.”

Dillian Whyte’s rivalry with Joshua, and the fact he had been in contention to fight him in a rematch at Wembley Stadium on an alternative date, would appear to have made the 31-year-old a suitable alternative but he is instead likely to be involved in a separate pay-per-view fight in July.

Luis Ortiz and Michael Hunter are among those understood to be considered potential opponents, and Smith added: “Dillian’s plan is to fight in July so I’m not sure he’s one of the proposed names.

“We understand a lot of fans have paid for the flights, hotels, travel, tickets; not just from the UK. We’ve sold tickets in 50 different countries around the world so we’re under pressure to deliver, and we’re going to work tirelessly to continue with the event for June 1st.”